Why Galaxies Care About AGB Stars: A Continuing Challenge through Cosmic Time 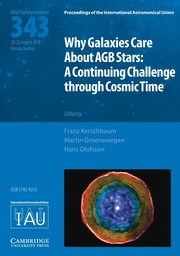