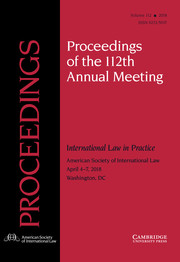 Building Victim-Led Coalitions in the Pursuit of Accountability

Operationalizing International Law: Beyond the State

The International and Transnational Law of Complex Financial Transactions

The Use of Force Against Non-State Actors