This is an Open Access article, distributed under the terms of the Creative Commons Attribution licence CC BY 4.0.
Copyright
Copyright © The Author(s), 2021. Published by Cambridge University Press on behalf of Fauna & Flora International

The Príncipe thrush Turdus xanthorhynchus is endemic to the small island of Príncipe, Democratic Republic of São Tomé and Príncipe, in the Gulf of Guinea, Central Africa. It is categorized as Critically Endangered on the IUCN Red List because of its small and declining population and its tiny range, restricted to the southern forests of Príncipe Natural Park. It has been presumed to be highly susceptible to habitat loss, hunting and predation from introduced mammals such as the mona monkey Cercopithecus mona, African civet Civettictis civetta, black rat Rattus rattus, and feral cats and dogs.

However, there has previously been only anecdotal evidence of the threat posed by introduced mammals (a 2018–2020 camera-trap survey led by Fauna & Flora International and Fundação Príncipe, funded by the Critical Ecosystem Partnership Fund, found all known introduced species across the thrush's range). Fundação Príncipe is now studying the impact of introduced mammals in more detail, supported by the Mohamed bin Zayed Species Conservation Fund.

Camera-trap monitoring of artificial thrush nests baited with quail eggs revealed 23 of 55 nests (42%) were predated within 6 days. Mona monkeys were responsible for 10 (18%) of these events; the other predators could not be identified. On 6 May 2021, an active thrush nest (the fifth ever found) was recorded on the slopes of Pico Príncipe, at 2.9 m height within the trunk of a Pseudagrostistachys africana tree. The nest was monitored with a camera trap during 19 May–7 July. Images show adult thrushes occupying the nest until 6 July. Mona monkeys inspected the nest on five separate occasions. We were, however, unable to confirm the presence of eggs or chicks and therefore we could not determine whether there had been a predation event. 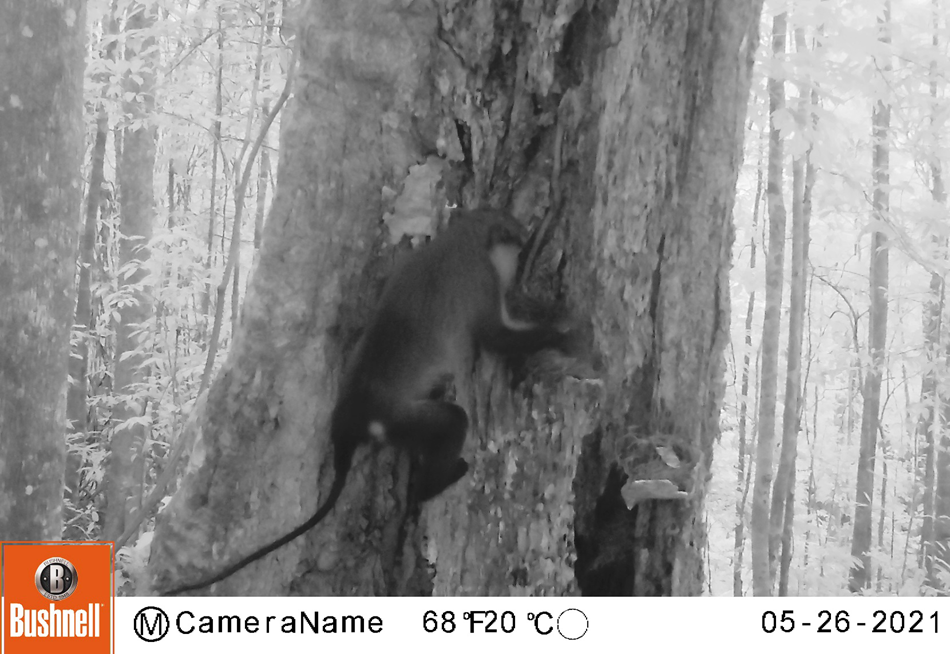 The artificial nest experiment and the visitations to the first Príncipe thrush nest to be monitored are compelling evidence that breeding activity of this Critically Endangered bird is being disrupted by mona monkeys. Eradication of the mona monkey is unrealistic given its wide distribution on Príncipe, and would be unpopular as it is a valued game species on the island. Working with local hunters to lower the density of this monkey could be a more feasible solution. To prevent the extinction of Príncipe's main flagship species, we need to prioritize the study of the distribution of introduced mammals and their impacts, and development of a participatory mitigation strategy that engages all key stakeholders. 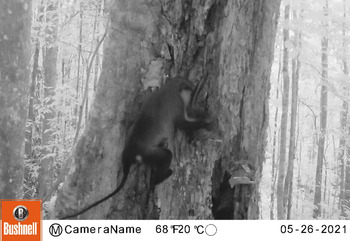