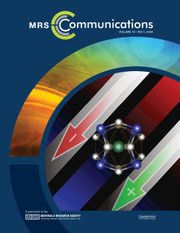 The time is right to highlight the importance of (bio)materials for three-dimensional (3D) cell biology. Materials used in 3D cell biology are crucial for both in vitro and in vivo applications in diverse research fields such as tissue engineering and development of in vitro organ/tissue model. More than ever, cell biology benefits from developments in materials science and related technologies to advance our basic understanding of cell biology and gives rise to novel solutions for problems in diagnostics and therapeutics.

In this special issue of MRS Communications, we have brought together a collection of articles from experts in the field focusing on 3D cell biology. We have placed a particular focus on capturing the achievements and future contributions of materials scientists and engineers in this exciting new area of biology. We envision biomaterials-based 3D models as fundamental research tools for addressing current questions in cell biology across disciplines. Such 3D models may be derived from animal sources (e.g., decellularized organs, tissues), but may also be assembled on supports (e.g., scaffolds, hydrogels) or in layered environments (e.g., on filters or in layer-by-layer formats) or indeed without supports (e.g., spheroids/organoids).

A key step forward in current research efforts is to recapitulate physiologically relevant 3D (micro)environments, not only in terms of biochemical cues, but also structural and physical cues such as morphology, stiffness, and fluid flow. Materials scientists have had particularly valuable contributions to the development of this trending 3D biology area both in terms of the development of biomaterials and also of the novel, innovative technologies that facilitate research in this area. In the first part of this special issue, the idea of “enabling technologies” and future challenges is explored, as applied to bone tissue engineering (Boys et al.) and neural engineering (Merryweather et al.), highlighting challenges to be solved in terms of accurately modeling tissue structure (Mandrycky et al.) and physiological vascular function (Wang et al.).

For the most part, since the establishment of reliable methods for extracting and culturing cells in the laboratory (in vitro), biologists have cultured these cells in dishes or plates, usually glass or plastic. An extraordinary amount of progress has been made in understanding the fundamentals of cell biology using these techniques. However, a realization has arisen over the last 30 years or so that 2D cell biology does not accurately represent tissue, particularly in the case of disease modeling. Numerous differences exist between cells grown in 2D and in 3D, including their mechanical properties and their access to biochemical cues (i.e., cells in 3D are exposed to gradients as opposed to cells in 2D, which may experience continuous exposure to nutrients and gases). These differences result not only in changes in the fundamental biology of the cell, but also in the physiology of the networks of cells or tissues. At a basic level, this can translate to significant differences when exposed to drugs or toxins, for example for pharmaceutical research, which can, and has, led to misleading data about the efficacy or mechanism of drugs.

An early point of entry for materials research in the field of 3D cell biology was through the generation of scaffolds based on polymers. These polymers could be of natural origin, bioinspired, or indeed entirely synthetic. Such scaffolds are now becoming even more sophisticated, incorporating many interesting functionalities. This special issue aims to highlight some of these methods generating features down to the nanoscale (Fu et al.), and incorporating functionalities such as magnetism for controlling shape (Gilroy et al.), and combining biodegradability with conductivity for electroactive cells (Guex et al.) or focusing on electrical functionalities (Ayala Camine et al.). The establishment of 3D printing procedures to generate such scaffolds anticipates the need for high-throughput generation of such structures for future applications in drug discovery or disease modeling, and allows tailoring of features which may enhance cell growth or proliferation (Guvendiren).

The differentiation of naïve cells is known to be critically dependent on mechanical cues from their substrate through a process known as mechanotransduction. Many tissues have a “stiffness” similar to gelatin, and thus a considerable mechanical mismatch occurs when they are cultured on the traditional, rigid substrates. Hydrogels have proved to be a very useful class of materials for 3D cell biology in part due to their ability to allow for cell encapsulation during fabrication, unlike other materials types, which must be seeded post-fabrication. Bio-derived hydrogels made from collagen, or its derivative gelatin, are commonly used, and in this special issue Jaipan et al. describe technologies for their production in their insightful prospective. More complex collagen scaffolds are described as a means to tailor mechanical properties (Ruehle et al.). Hydrogels are increasingly being used to model disease progression, for example in cancer due to their tissue mimetic properties as illustrated by two further articles (Holt el al. and Pedron et al.), while conducting hydrogels show great promise for generating neural disease models (Goding et al.). The fundamental principle of mechanotransduction is not forgotten either, the importance of mechanical cues on stem cell development being explored by Azoides et al. and Bahlmann et al., while the combination of hydrogels with microchannels was effectively used by Nasrollahi et al. for epithelial cell clusters.

The right combination of mechanical and biochemical cues can be used to generate 3D clusters of cells that are considered “scaffold-free.” Depending on their complexity, these clusters can be called spheroids or organoids. The simplest spheroids differ from a hydrogel or scaffold-based 3D models by being limited in size, without the “template” provided by the scaffold; however, they have already been used very effectively for studying biology in 3D. As an example, Mauretti et al. studied fundamental cell fate decision-making using 3D stem cell organoids. A prospective by Dye et al. highlights the complementarity of materials for organoid cultures, overcoming challenges related to growth and maintenance of the cells.

In summary, this special issue provides a snapshot of cutting-edge research in the field of 3D cell biology, combined with prospective from leading actors in this area on current and future trends. It is undeniable that materials research has made a significant contribution to this field, and will continue to do so, through the generation and implementation of ever-more innovative and multi-functional materials. The impact of this research in the future is certain to be positive with respect to the development of tissue implants, but also the generation of novel, more effective therapies and a better understanding of the biological system that is being targeted.