Researchers around the world have been investigating alternative materials that can support operation of concentrating solar power (CSP) systems at higher temperatures, and thus higher efficiencies, making concentrating solar electricity cost-competitive compared to photovoltaics and fossil fuel power. Cost reduction of CSP technology requires materials and components that will be stable and function above 700°C, a temperature that surpasses today’s operating conditions by 150 degrees or more.

CSP systems capture solar energy as heat that can be converted directly to electricity or stored for later conversion when electricity is in greater demand. The flexibility provided by the ability to store the thermal energy as heat is a unique feature among renewable energy technologies.

CSP systems are comprised of sun-tracking mirrors that reflect sunbeams onto a solar receiver. The receiver can be in a number of configurations, including towers, troughs, or dishes. CSP towers have an installed capacity that is increasing worldwide. In a CSP tower plant, a field of mirrors known as heliostats surrounds the solar tower and conentrates the sunlight onto a receiver on the top of the tower. There, the concentrated solar energy heats a heat-transfer fluid (HTF) in the receiver. Through high-temperature liquid-phase pumps and valves, the HTF delivers the thermal energy either to a heat storage tank or transfers it, through a heat exchanger, to a working fluid, such as steam or supercritical CO2, which powers turbines to generate electricity.

The US Department of Energy (DOE) launched a program in May 2018 to build a third-generation Concentrating Solar Power tower (GEN3 CSP) demonstration site, which will test and validate heat transfer and thermal storage above 700°C. The technology is designed to lead to commercial systems that will meet the DOE goal to generate electricity at a cost of USD3 cents/kWh by 2030, making CSP competitive to other renewable energy sources. The USD$72 million award is divided into two different topics. In Topic 1, three teams were chosen to develop and demonstrate an integrated high-temperature full-scale GEN3 CSP tower design along one of three paths: gas-phase, (solid) particle, and liquid. In the second topic, smaller, more targeted, R&D projects will support the goal of the first topic by building components for the integrated systems or by testing theory and materials involved in the project. After two years, one of these design pathways will be given the greenlight to proceed to scale up to a demonstration system by 2023.

In all pathways, materials are important for the success of the project; the liquid pathway in particular presents specific materials challenges. “Being able to control the materials issues are the primary impediments we have to our success,” said Craig Turchi, member of the Thermal Sciences R&D Group of the National Renewable Energy Laboratory (NREL) and the principal investigator of the liquid pathway.

Until now, nitrate (NO3–) as well as nitrate/nitrite (NO3–/NO2–) molten salts have been exclusively used in GEN2 CSP tower plants, both as the HTF and for thermal storage, while water has been the working fluid in steam turbine power cycles. However, nitrates operate at an upper limit of about 550°C, above which they begin to decompose, and CSP steam cycles max out at 600°C.

The DOE has been funding ongoing research on an experimental power cycle that uses supercritical carbon dioxide (sCO2) as working fluid, a fluid state of CO2 that exhibits both liquid and gas properties above its critical temperature and pressure. The sCO2 power cycle operates at around 700–750°C and has the potential to raise significantly the thermal power cycle efficiency of the plant, thus lowering the cost. The challenge is to find the ideal materials that will play the roles of HTF and thermal storage, as well as materials of construction.

Researchers in the liquid pathway are considering molten chloride salts, such as magnesium sodium potassium chloride (Mg-Na-K Cl), and liquid sodium metal as HTFs. Why chloride salts? “Practical limitations reduce the infinite number of salt mixtures that could be theoretically used to a subset of inexpensive, nontoxic substances with good thermostability. Chlorides have been shown to have the best combination of the desired characteristics, although far from ideal,” said Turchi.

Corrosion is one of the most pressing issues in the liquid pathway. The moment moisture enters the melt, water reacts with the magnesium chloride (MgCl) salt to form a magnesium hydroxide chloride (HClMgO). In the process, it also liberates hydrochloric acid (HCl), responsible for the corrosion of the tank. Turchi is optimistic. “The ability to control corrosion has been demonstrated successfully in several different labs,” he said.

The lab of Bruce Pint, at Oak Ridge National Laboratory, has already had good initial results in this direction. Pint and his colleagues are investigating the corrosion mechanisms of chloride salts and their compatibility with conventional alloys used for CSP plant components. Their initial testing of very pure chloride salts indicates a low rate for corrosion reactions. “We now need to show that in longer times in flow experiments,” said Pint.

Turchi and Pint agree that eliminating any source of impurities, like water or oxygen, from the chloride melt results in chlorides that are surprisingly noncorrosive. “We want to be able to detect such impurities when they enter the salt, so we can activate our corrosion control methods. The DOE-led team has developed an additive that goes into the chloride salt and effectively scavenges water or oxygen if it shows up in the melt,” Turchi said. Detecting the impurities in salt is in its early stages.

For Liu, the salt purification process may be, in the end, prohibitively expensive. She believes the problem may be resolved by using another liquid, such as liquid sodium metal, a commercial HTF with very good thermophysical properties that are relatively inexpensive, but very reactive if it contacts air or water. Its reactivity is the reason it has become an outcast in the CSP community, a situation that Turchi hopes they can change. “Sodium has been used for decades as a HTF in industry and in the power sector. Its risks and management strategies are well known,” he said. 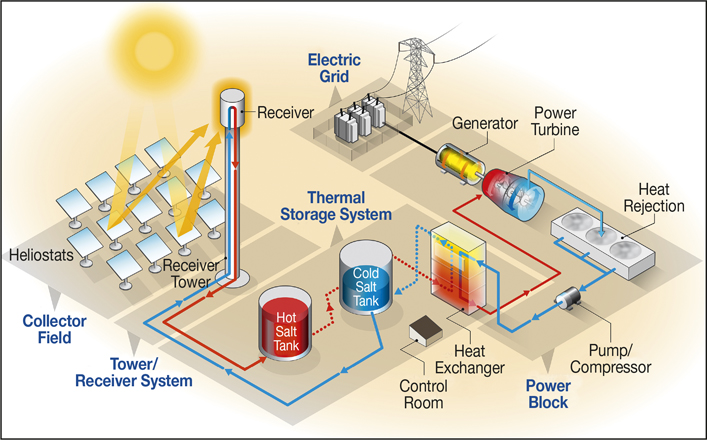 Molten-salt power tower with direct storage of salt and a generic power cycle. While the GEN3 projects are not testing a power cycle, a sCO2 cycle is the targeted power-conversion system for the eventual commercial design. Credit: Al Hicks, National Renewable Energy Laboratory.

Under Topic 2, Powdermet Inc. is looking into materials that can be used for components of the molten salt pumps. “What we have is a patented ceramic-reinforced metal composite (cermet),” said Joseph Hensel, principal investigator for Powdermet’s component development project. “We have already tested it for its corrosion resistance at 750°C in the chosen salt, and it works quite well for 125 hours. One grade, in particular, has essentially shown no corrosion,” he said. Hensel knows 125 hours is not sufficient to have conclusive results, so in this phase, they aim to build a real pump using cermet material to demonstrate its function for longer periods.

Kenneth Sandhage, professor at Purdue University, and his collaborators have recently made a breakthrough by redesigning and testing another ceramic–metal composite for the heat exchanger in the GEN3 CSP plant. Their material is a combination of zirconium carbide (ZrC) as the ceramic component and tungsten (W) metal. The ZrC/W cermet has an ultrahigh melting point, it is thermally conductive, thermally cyclable, very stiff and tough, and has a relatively high failure strength. The researchers can also mold it in complicated shapes via a patented process. “We start with a 50% porous tungsten-carbide plate, which we immerse in a Zr-bearing liquid. The liquid infiltrates the pores, and then it reacts to give ZrC and W. The new solid materials fill the pores of the plate, with very little change of its shape or size,” said Sandhage.

Renkun Chen, professor at the University of California, San Diego, is developing a diagnostic tool that can measure, with high precision, thermophysical properties, such as thermal conductivity and heat capacity, in several materials used in a GEN3 CSP plant. He believes that providing the other teams with the exact values of these properties can help them choose the right combination of salts, alloys, and coatings. “There is currently no commercial set up to measure with certainty these properties in situ at very high temperatures while the plant operates,” he said. The big challenge is to design their instrument in a way that it will be resilient to the thermal stress and damage that can occur in the proximity of a CSP solar tower.

Even if they end up with an inexpensive solution for the HTF, and they are able to solve all corrosion issues, other challenges await researchers. “The temperatures that we want to run at necessitate that we build the hot tank out of a temperature-resistant alloy, like Inconel, and that is too expensive,” said Turchi. They now focus a large amount of effort on designing an internal liner for the tank that will provide insulating capability, so they can build the tank from stainless steel or carbon steel instead.

The melting points of the chloride salts are also quite high, meaning that there is a danger that the salt may freeze in the pipes. The lowest mp that they have been able to get is around 400°C, double what it is currently commercially used (around 220°C). “We plan to deploy a different power cycle, which will allow us to keep it at higher temperatures, but the danger remains,” said Turchi. Finally, Turchi refers to the thermal conductivity and heat capacity of the salt, which are lower than preferred. “We can tolerate that, but it will definitely impact the overall efficiency and cost of the process.”

To bring a Generation 3 concentrating solar power plant to life, researchers will have to cut the GEN3 CSP plant Gordian knot and fill knowledge and technology gaps that are tightly interconnected. When asked about what will happen at the end of the first two years of evaluation, Turchi said, “We will not have answered all the questions; there will be a certain amount of uncertainty, but our pathway is shaped to move forward with design that will address questions that need to be answered before an initial commercial plant can be built.”