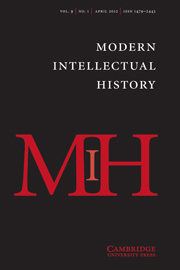 Forum: The Present and Future of American Intellectual History