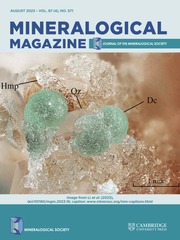 The crystal structure of the mineral mertieite-II from the Kaarreoja River, Inari commune, Finnish Lapland, Finland, was refined to R1 = 0.0222 (I) and 0.0228 (II) on the basis of X-ray diffraction data collected from two single crystals. The mineral is trigonal, space group is

This is an Open Access article, distributed under the terms of the Creative Commons Attribution licence (http://creativecommons.org/licenses/by/4.0/), which permits unrestricted re-use, distribution, and reproduction in any medium, provided the original work is properly cited.
Copyright
Copyright © The Mineralogical Society 2018

After a few years the mertieite minerals were re-examined (Cabri et al., Reference Cabri, Laflamme, Stewart, Rowland and Chen1975) and it was established that the composition of mertieite-II corresponds to Pd8(Sb,As)3, and the parameters of its rhombohedral unit cell are: a = 7.55 Å, c = 43.18 Å. Later Cabri (Reference Cabri1980) gave the structural formula for the mineral as Pd16Sb5As (Z = 6) with space group

$R\bar 3c$ based on an unpublished crystal-structure determination. Arsenic atoms were located in a special position (As1), and the Sb to As ratio was found to be equal to 5:1.

The current study is devoted to the crystal-structure analysis of natural mertieite-II, Pd8(Sb,As)3. The structure was refined successfully and the space group, coordinates of atoms in anisotropic form, site populations, interatomic distances and structural formula were defined.

The mertieite-II crystals for this structural refinement were received from Dr. Kari Kojonen, Geological Survey of Finland. They were collected from the black sands of gold placers from the Kaarreoja River, Inari commune, Finnish Lapland, Finland (68,65°N, 25,63°E). The most probable source of the platinum-group minerals (PGM) is the mafic-ultramafic layered intrusions represented by gabbros and pyroxenites previously mapped as amphibolites that lie upstream of the sample-collection point (Meriläinen, Reference Meriläinen1976; Kojonen, Reference Kojonen2011).

Platinum-group mineral nuggets from the heavy fraction were mounted in an epoxy resin and a polished mount was prepared for examination by optical and scanning electron microscopy (SEM). 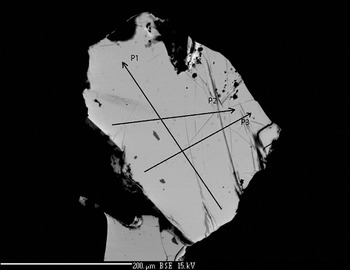 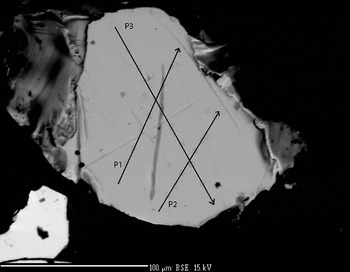 * Average analysis along the profiles.

** Calculated with 11 atoms per formula unit.

*** Calculated with 8 atoms of Pd per formula unit.

The grains were retrieved from the polished mount and analysed by single-crystal X-ray diffraction at the Center of X-ray diffraction studies at St. Petersburg State University (XRD Center SPbSU). Experimental data collection was achieved using an Agilent Technologies Xcalibur Eos diffractometer, which was operated at 50 kV and 40 mA. A hemisphere of three-dimensional data was collected at 293 K using monochromatic MoKα radiation. The data were integrated and corrected by means of the CrysAlisPro (Agilent Technologies, 2012) program package, which was also used to apply empirical absorption correction using spherical harmonics, implemented in the SCALE3 ABSPACK scaling algorithm. The structures were solved by direct methods using the SHELXT program (Sheldrick, Reference Sheldrick2015). Four Pd positions, two Sb positions and one As site were located in the structure. The SHELXL program (Sheldrick, Reference Sheldrick2008) was used for the crystal-structure refinement. The population of the Sb and As sites was refined against Sb/As. The Sb1 and As1 site are occupied completely by Sb and As atoms, respectively. The site-occupancy factors of the M1 site were defined as Sb0.94As0.06 (crystal I) and Sb0.88As0.12 (crystal II). The structures were refined to R1 = 0.0222 for 574 (I) and R1 = 0.0228 for 567 (II) unique observed reflections with |Fo| ≥ 4σF. The crystallographic data and selected refinement parameters are shown in Table 2. The final atomic coordinates and displacement parameters are listed in Tables 3 and 4, and the selected interatomic distances are in Table 5. Table 6 shows the coordination numbers and the average values of the bond lengths.

Table 6. The coordination numbers together with the average values of the Pd–Pd and Pd–Sb/As distances around the different atoms in mertietite-II and Pd8Sb3.

* Sb3 position on the Pd8Sb3 structure.

The calculated formulae are not completely identical with the general formula of mertieite-II (Table 7). Mertieite-II from the Kaarreoja River is characterized by a greater As content and a lower Sb content compared with mertieite-II from other localities.

Table 7. The compositions of mertieite-II from different localities.

The structure of mertieite-II contains four symmetrically independent Pd atom positions with two 36f (Pd1 and Pd2) and two 12c (Pd3 and Pd4) Wyckoff positions. The coordination polyhedra are: a Pd1-polyhedron that is a distorted Frank-Kasper polyhedron (14-vertex); the Pd2- and Pd3-polyhedra that are 13-vertex capped distorted icosahedra; and the Pd4 polyhedron that is an 11-vertex pentacapped trigonal prism (Fig. 3).

The unit cell of mertieite-II has a very elongated c parameter (~43 Å) (Fig. 4). Two types of triangular 36 nets of Sb and As atoms contribute to the structure (Fig. 5a,b). One type of net is built up only of Sb atoms in the Sb1 position; the other type of net consists of Sb and As atoms in both the M1 and As1 positions. The (M1,As1)-nets are slightly distorted with As and Sb atoms displaced above and below the (110) plane.

Fig. 4. Projection of the mertieite-II structure along the x axis. Sb atoms are drawn as large blue circles, As atoms as large black circles, Pd atoms as small red circles. 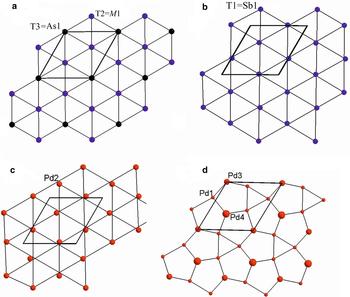 The Sb-net and the (Sb,As)-net form a two-dimensional ‘sandwich’-like package (Fig. 6). Palladium atoms occupy all of the octahedral and 5/6 of the tetrahedral interstices of the package. Thus there are two types of Pd-net inside the As,Sb-package the heights of which are ~1/3 of the interlayer distance above and below each As, Sb net (Fig. 6). 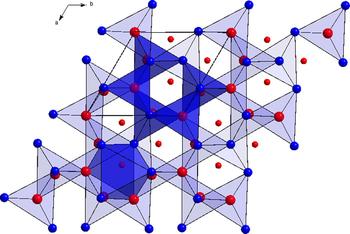 Pearson (Reference Pearson1972) proposed a classification of metallic phases based on nets of atoms. The triangular As, Sb and Pd nets of the mertieite-II structure are the close-packed 36 layer according to Pearson's classification. The crystal structures of synthetic Pd8Sb3 and natural mertieite-II, Pd8Sb2.5As0.5, can be derived from the hexagonal close packing by filling additional layers between the close-packed 36 layers.

Crystal-structure analysis of mertieite-II from the Kaarreoja River placer confirmed that As atoms occupy a special position in the structure as indicated by previous studies of the mineral from other localities (Cabri, Reference Cabri1980; McDonald and Cabri, Reference McDonald and Cabri2005). In the present investigation slightly more As-rich crystals were studied. The Sb- and As-site occupancies of the structure were analysed. The formulae of mertieite-II from the Kaarreoja River defined by structural analysis are Pd8Sb1.5(Sb0.94As0.06)As0.5 (crystal I) and Pd8Sb1.5(Sb0.88As0.12)As0.5 (crystal II). These results are in relatively good agreement with formulae calculated from microprobe data: Pd8Sb2.27As0.64 (crystal I) and Pd8Sb2.18As0.71 (crystal II). Mertieite-II crystals from others localities have insufficient As content to completely fill the As1 site (Table 7 and Fig. 7). The Sb content of some of the mertieite-II grains is greater than the capacity of all of the Sb sites in the structure. Therefore, the excess Sb may also occupy the As1 site. The general formula of mertieite-II is Pd8(Sb,As)3 (Cabri, Reference Cabri and Cabri2002). Note, however, that Pd8As3 and Pd8Sb3 are not isostructural. Furthermore, there is no complete solid solution series Pd8As3–Pd8Sb3. The mineral Pd8As2.5Sb0.5 is arsenopalladinite with triclinic symmetry, space group

Pd8Sb2.5As0.5 (Z = 12) is a more convenient form of the formula because the common formula of the mertieite mineral group can be represented as: Pd8T11.5T21T30.5, where T1, T2 and T3 are three possible positions of the Sb and As atoms in the triangular nets of the structure. Different distributions of the Sb and As atoms in these positions are possible. The T3 position is completely occupied by As atoms in mertieite-II, Pd8Sb2.5As0.5, and by Sb atoms in the arsenopalladinite, Pd8As2.5Sb0.5 (Karimova et al., unpublished work). Arsenic atoms should occupy all three positions: T1, T2 and T3, in stillwaterite, Pd8As3. Mertieite-I, is probably a further member of the group. Its formula can be calculated on the basis of 11 atoms: Pd8As1.5Sb1.5. More structural studies of stillwaterite and mertieite-I are required to check the last two hypotheses.

The authors acknowledge the generosity of Dr. Kari Kojonen for providing the samples and assistance with the selection and discussion of materials. They are grateful for an insightful review by Dr. František Laufek and the guest editors Drs John Bowles, Nigel Cook, Hannah Hughes, Krister Sundblad and Erik Jonsson for their comments and corrections. They thank Dr. N. Trubkin (IGEM RAS) for SEM/EDS analyses and Prof. Sergey V. Krivovichev and Dr. Vlad V. Gurzhiy for assistance in this scientific research. They also acknowledge the Center of X-ray diffraction studies at St. Petersburg State University (XRD Center SPbSU) for allowing them to collect the experimental data. This study was supported by the Russian Academy of Sciences, Program of Fundamental Research A 72-2 and 72-3.

This paper is part of a special issue entitled ‘Critical-metal mineralogy and ore genesis’. The Applied Mineralogy Group of the Mineralogical Society and the IMA Commission on Ore Mineralogy have contributed to the costs of Open Access publication for this paper.

Table 6. The coordination numbers together with the average values of the Pd–Pd and Pd–Sb/As distances around the different atoms in mertietite-II and Pd8Sb3.

Table 7. The compositions of mertieite-II from different localities.

Fig. 4. Projection of the mertieite-II structure along the x axis. Sb atoms are drawn as large blue circles, As atoms as large black circles, Pd atoms as small red circles. 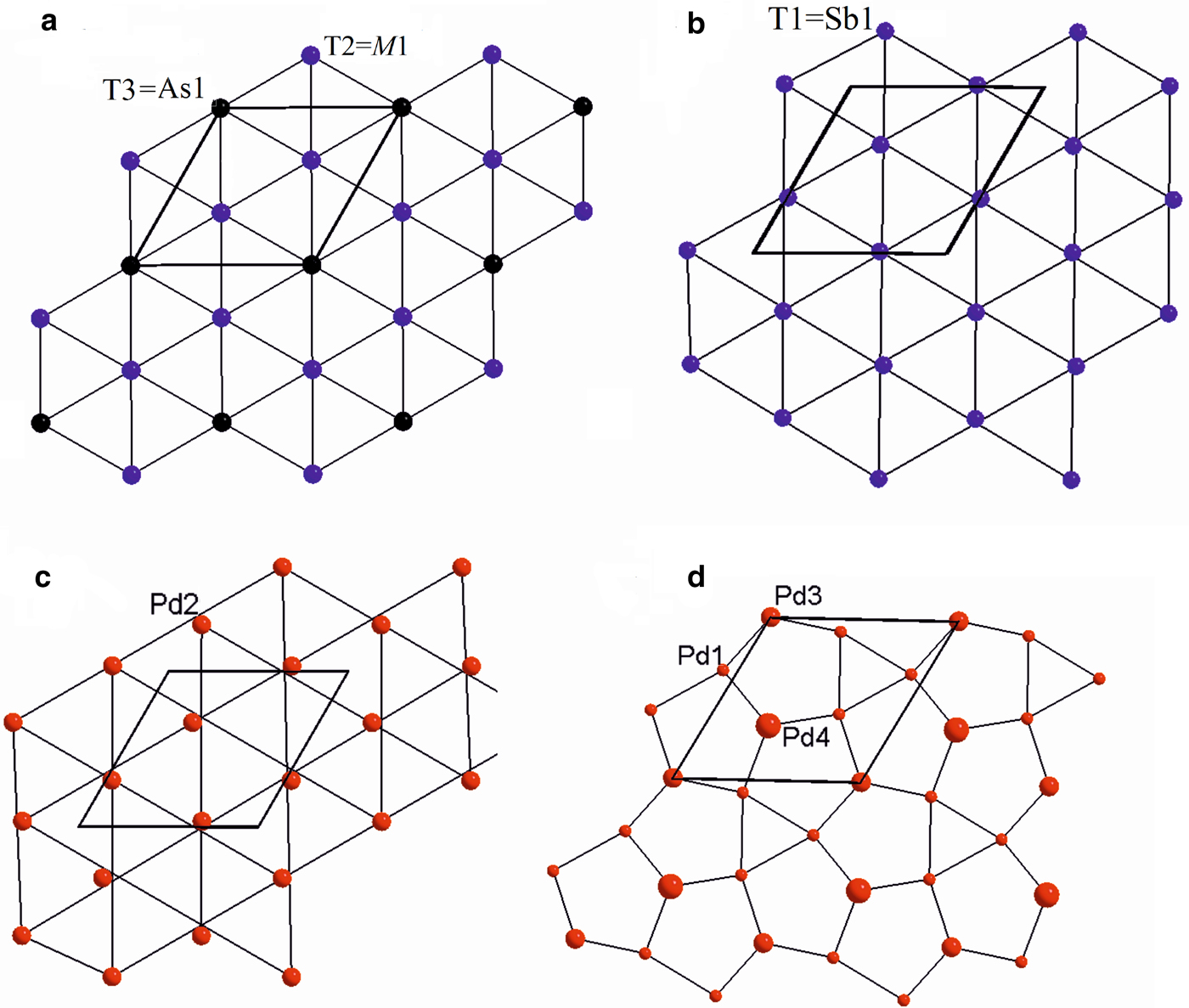 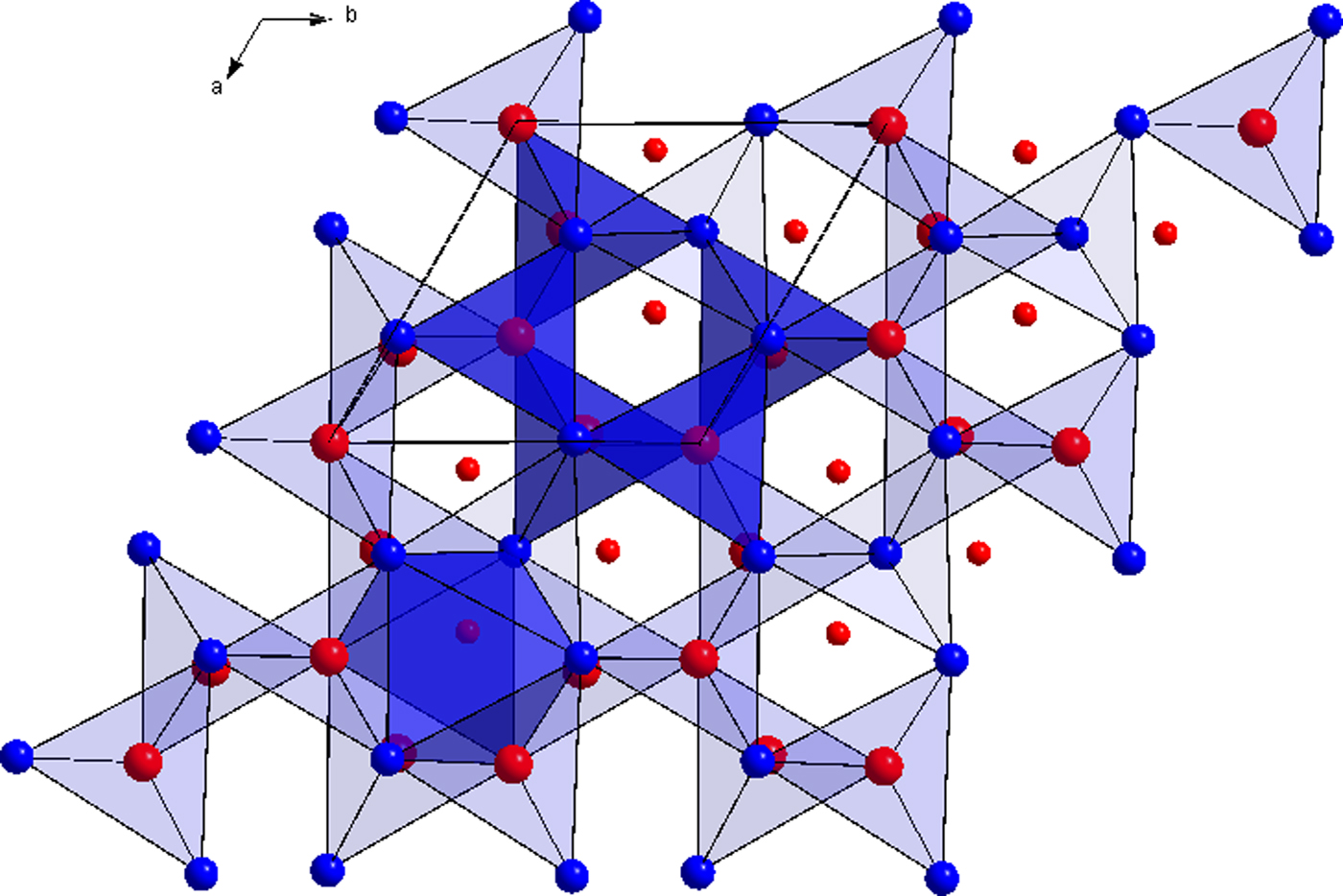