Why You Can't Squash this Bug!

The diabolical ironclad beetle (DIB: Phloeodes diabolicus) is an oak-dwelling fungivore primarily residing on the west coast of North America. Entomologists who are fortunate enough to have one of these bugs in their collection are challenged when displaying it, since the steel pin used to mount the specimen often bends as it is inserted into the beetle. This is due to the particularly rugged exoskeletal forewings (elytra) of this beetle. The paired elytra are fused to provide a strong shield to resist predation by crushing or pecking. Also, this beetle uses its elytra as camouflage, resembling a stone. The elytra are about twice as dense as those of a typical flying beetle, demonstrating that they have evolved as an impressive protective shield rather than appendages for flight. This defensive capability is largely due to the microscopic arrangement of the tough organic components of the elytra. This microstructure was recently investigated by a large international team lead by Jesus Rivera and David Kisailus [Reference Rivera1] using optical microscopy, scanning electron microscopy (SEM), micro-computed tomography (micro-CT), compression testing, finite element analysis, and digital image correlation, among other methods. This elegant study has the potential for modern manufacturing to improve how certain materials are fastened together.

In the DIB the pair of elytra are fused by a robust interface. The median suture consists of interdigitated “jigsaw” arrangements of protruding segments, called blades, along the length of the abdomen. Whereas there are substantial differences in the geometry, thickness, and extent of interdigitation among beetles in general, the greatest number of interlocking elements is found in the DIB.

The protective capability of the elytra is derived from the strong median suture and reliance on lateral supports to redirect compressive forces around the internal organs. This protects the beetle and even allows it to survive being run over by a car. Observations of the exoskelton by SEM and micro-CT revealed three distinct lateral interfacial architectures that provide support between the elytra and the ventral cuticle: interdigitated, latching, and freestanding motifs. Further study with micro-CT showed that these regions merge seamlessly into one another along the length of the body. These and several other observations led Rivera et al. to surmise that the freestanding and interlocking supports enable deflection of the elytra and therefore increase the energy absorption during crushing events by providing compliance, while the interdigitated supports increase stiffness.

SEM of cross sections of the median suture revealed a laminated architecture, which, when placed under tensile loading, showed failure in the matrix, highlighting local delamination (Figure 1). Unlike homogeneous materials, which typically fail at their thinnest feature, the laminated microstructure within the blades of the suture enables considerable strain release and energy dissipation, circumventing catastrophic failure at the thinnest part of the blades. It appears that delamination within the microstructure of the blade prevents localized stresses that would cause failure at its thinnest part, thereby ensuring survival of this robust beetle. 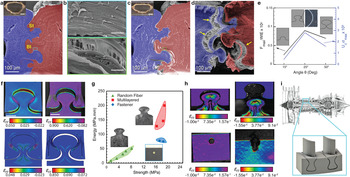 Rivera et al. suggest that the potential advantages of this design as a mechanical fastener may be applicable to manufactured structures that are subjected to high stress, such as turbine blades or aerospace structures. This and other designs revealed in the DIB could be useful in joining similar or dissimilar engineering materials, such as plastics and metals. Rivera et al. demonstrated that composites fabricated to mimic the DIB suture geometry and microstructure provide immediate advantages over current fasteners used in aviation manufacturing, providing enhanced strength and substantially increased toughness (defined as energy absorbed before failure). They fabricated carbon fiber composites that mimicked the laminated sutures, and their strength was slightly greater than a titanium-based aircraft fastener and the toughness was twice as great!

Why You Can't Squash this Bug!
×

Why You Can't Squash this Bug!
×