Cardiovascular diseases are the number one cause of death in industrialized countries. To date, heart transplantation is the only treatment available for patients with end-stage cardiac failure. Many of these patients die while waiting for a suitable donor heart; therefore, there is a need to develop new approaches to regenerate cardiac muscle that has infarcted. Since, in theory, only the infarcted portion needs to be replaced, a functional “patch” may be all that is needed to restore cardiac function to a survivable level. Tissue engineering of cardiac tissue provides such an approach by integrating cardiac cells and 3D biomaterials. The latter serve as temporary scaffolds, mechanically supporting the cells and promoting their reorganization into a functional tissue. This could be fashioned in vitro until the patch is mature enough to be transplanted onto the infarction site. After integration into the host commences, the biomaterials gradually degrade leaving a functional living patch that restores cardiac function. Recently Nadav Noor, Assaf Shapira, Reuven Edri, Idan Gal, Lior Wertheim, and Tal Dvir developed a thick and perfusable cardiac patch, using 3D printing, that shows much promise for treating end-stage cardiac failure [Reference Noor1].

The biocompatibility of the scaffolding materials is a crucial factor for eliminating the risk of implant rejection, which in turn jeopardizes the success of the treatment. Therefore, Noor et al. developed a method to use autologous tissue for the scaffold. They took adipose tissue from the omentum of either patients or pigs. Then the cellular and acellular materials were separated. While the cells were reprogrammed to become pluripotent stem cells and differentiated into cardiac muscle cells and blood vessel-forming cells, the extracellular matrix was processed into a personalized hydrogel. The cells and hydrogel were mixed to generate patient-specific, immunocompatible cardiac patches. Two cellular “bioinks” were generated: the cardiac cell bioink, which was used for printing the parenchymal tissue, and a bioink consisting of blood vessel-forming cells. In this strategy, when using the patient's own materials and cells, the two bioinks may be used to print thick, vascularized, and perfusable patches of cardiac tissue that fully match the immunological, biochemical, and anatomic properties of the patient. Furthermore, the authors demonstrated that the personalized hydrogel can be used to print volumetric, freestanding, cellular structures, including entire hearts with their major blood vessels! 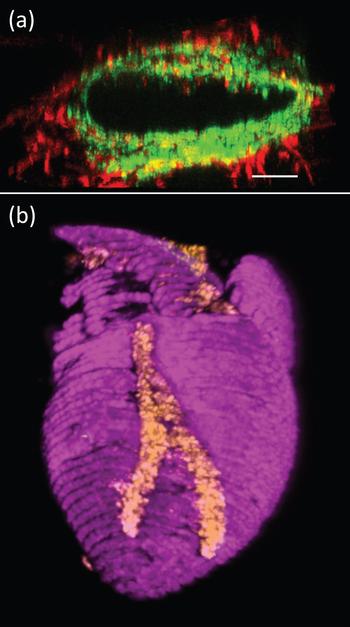 These and other results demonstrated the ability to use the patient's own cells and extracellular material for 3D printing of fully personalized contracting cardiac patches that closely fit the patient's biochemical and cellular properties, as well as the anatomy of the patient. This approach can yield structures several millimeters thick, which is sufficient for engineering clinically relevant cardiac patches.

Finally, Noor et al. conducted some proof of concept studies. They fabricated small-scale cellularized human hearts with major blood vessels, based on a digital design. A heart several centimeters in height was constructed. Immunostaining demonstrated the presence of cardiac myocytes and endothelial cells (Figure 1b). Although a great deal of research and development needs to be devoted, this is an elegant first step toward the generation of a functional, mechanically stable organ that may be amenable to clinical applications.