Evidence of an Organism Moving 2.1 Billion Years Ago!

Until now the earliest evidence of moving life forms was from half a billion years ago. In an intriguing new study by Abderrazak El Albani, Donald Canfield, and a large international scientific team, evidence is presented that could suggest moving organisms existed from a much earlier time [Reference El Abani1]. Examining exquisitely preserved fossils from the Francevillian Basin in Gabon, Africa, El Albani et al. found string-shaped formations or structures up to 6 mm in diameter and extending up to 170 mm through the layers (Figure). These fossils are thought to be 2.1 billion years old and were formed at that time in an oxygenated shallow-marine environment. Oxygen levels could have been high at that time and then became much lower, consistent with life forms at this time later dying out. 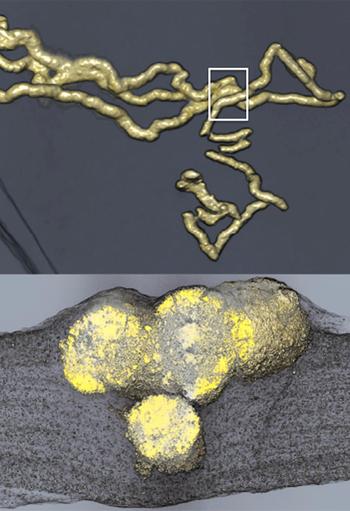 El Albani et al. used scanning electron microscopy (SEM) in combination with microtomographic, geochemical, and sedimentologic analyses. It is suggested that the structures underwent fossilization during early changes to sedimentary rock near the sediment-water interface. Morphological and 3D tomographic reconstructions suggest that the structures were produced by a multicellular or syncytial organism that was able to migrate laterally and vertically to reach food resources. El Albani et al. suggested that a possible modern analog could be something similar to colonial amoeba or slime molds, organisms that normally live separately.

An interesting series of studies were done using X-ray microcomputed tomography (micro-CT). Analysis of these images revealed the presence of string-shaped structures within the layers of the fossils. Some of these structures were close to layers of pyrite (iron sulfate, commonly called fool's gold) suggesting an association with organic-rich mats where microbial sulfate reduction was enhanced. This and other features indicate compaction of soft, fine-grained sediment around a relatively rigid object and show that the strings were in place and mineralized when the sediments were still compacting.

Combined SEM backscattered electron imaging and energy-dispersive X-ray spectrometry analysis also indicate contrasting textures and mineralogical composition within and outside the strings. Very few minerals such as quartz are scattered within the pyrite strings, whereas grains of clay show signs of growth within pores.

The overall morphology of the Francevillian structures suggested to El Albani et al. an organism that was able to aggregate and migrate in a similar fashion to that of cellular slime molds, leaving a mucus trail behind. However there are two significant differences between the Franncevillian structures and those formed by modern slime molds. First, slime molds live in soils, not in marine sediment. Second, slime molds are significantly smaller than these structures. El Albani et al. rather suggest an analogous situation wherein amoeba-like organisms with the capability to aggregate in a similar fashion could have been responsible for producing complex fossilized structures.

El Albani et al. point out that it remains uncertain whether the Francevillian string-like structures represent a failed natural experiment or a prelude to subsequent evolutionary innovations. If their interpretation is correct, these finding challenge the conventional version of the evolution of life. It will be interesting to see if results from independent groups support this new conclusion or refute it.

Evidence of an Organism Moving 2.1 Billion Years Ago!
×

Evidence of an Organism Moving 2.1 Billion Years Ago!
×

Evidence of an Organism Moving 2.1 Billion Years Ago!
×
×