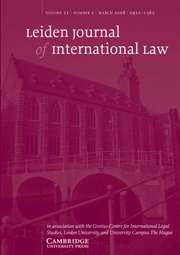 HAGUE INTERNATIONAL TRIBUNALS: International Criminal Tribunals for the Former Yugoslavia and for Rwanda