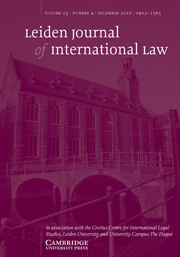 HAGUE INTERNATIONAL TRIBUNALS: The Kampala Compromise on the Crime of Aggression