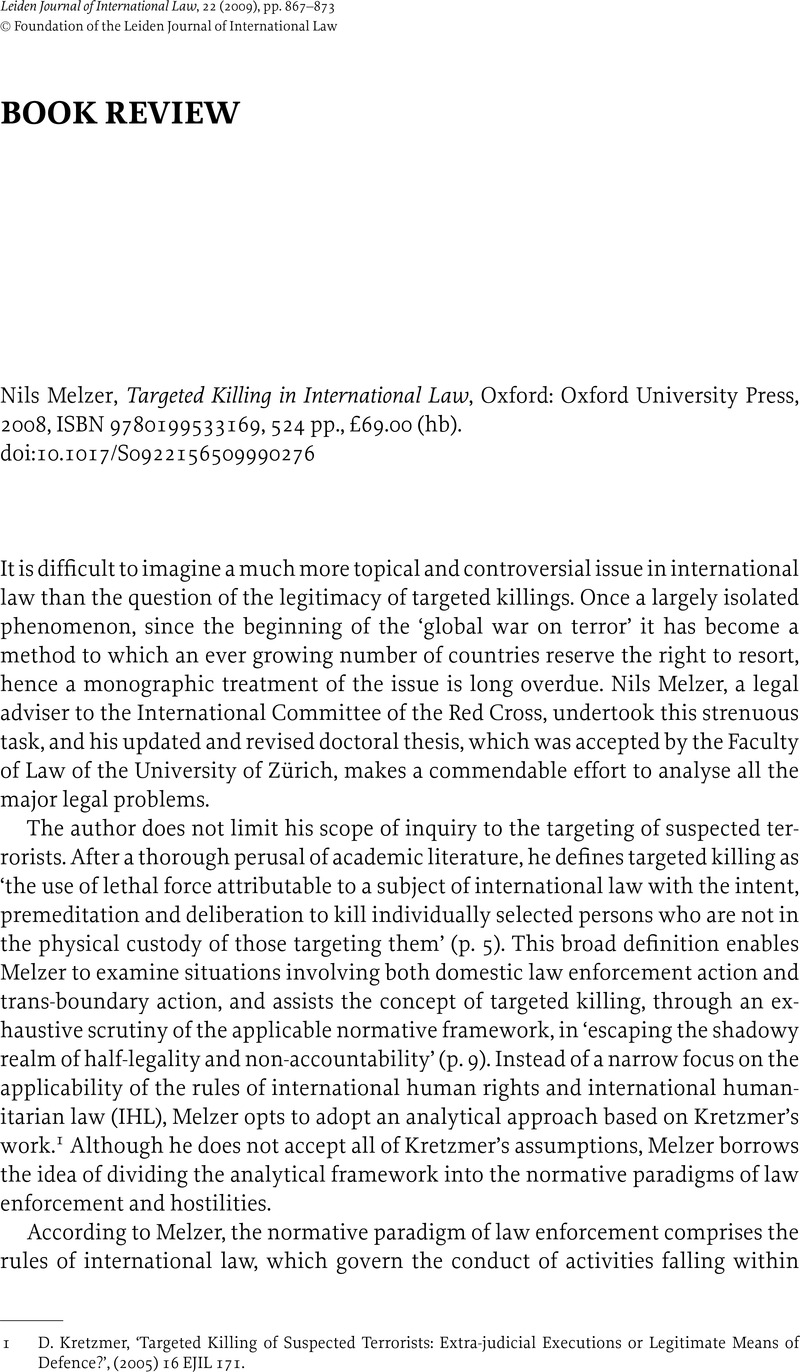 2 ‘A civilian taking a direct part in hostilities cannot be attacked . . . if a less harmful means can be employed.’ Public Committee against Torture in Israel v. Government of Israel et al., Decision of 14 December 2006, HCJ 769/02, at 40.

4 Y. Dinstein, The Conduct of Hostilities under the Law of International Armed Conflict (2004), 88.

5 Dinstein, for instance, affirms that ‘[t]he only way for members of the armed forces to immunize themselves from further attack is to surrender, thereby becoming hors de combat.’ Ibid., 94. The major humanitarian law treatises seem to deem it obvious that all military objectives can be legitimately targeted. See inter alia Y. Sandoz, C. Swinarski, and B. Zimmermann (eds.), Commentary on the Additional Protocol of 8 June 1977 to the Geneva Conventions of 12 August 1949 (1987), 635; L. C. Green, The Contemporary Law of Armed Conflict (2000), 191; A. P. V. Rogers, Law on the Battlefield (1996), 33.

13 The ICRC study uses exactly the same argument. In Rule 3 it stipulates that ‘All members of the armed forces of a party to the conflict are combatants, except medical and religious personnel’, and while it affirms that combatant status only exists in international armed conflicts the study still finds useful the notion of ‘combatant’ for purposes of the principle of distinction even in non-international armed conflicts. The study cites as examples GA Res. 2676 (XXV) of 9 December 1970 and the Cairo Declaration and Cairo Plan for Action, adopted at the Africa–Europe Summit held under the aegis of the Organization of African Unity and the European Union on 3–4 April 2000, but admits that treaty provisions use different designations and that therefore it is still difficult to see why any weight should be given to these non-binding documents. Ibid., at 11–13.

15 ‘Elementary considerations of humanity and common sense make it preposterous that the use by States of weapons prohibited in armed conflicts between themselves be allowed when States try to put down rebellion by their own nationals on their own territory. What is inhumane, and consequently proscribed, in international wars, cannot but be inhumane and inadmissible in civil strife.’ Prosecutor v. Tadić, Decision on the Defence Motion for Interlocutory Appeal on Jurisdiction, Case No. IT-94–1-AR72, Appeals Chamber, 2 October 1995, para. 119. However, it is doubtful that the jurisprudence of the ICTY is completely reliable as evidence of customary international law. See T. Hoffmann, ‘The Gentle Humanizer of Humanitarian Law: Antonio Cassese and the Creation of the Customary Law of Non-international Armed Conflicts’, in C. Stahn and L. V. D. Herik (eds.), Future Perspectives on International Criminal Justice (2009) (forthcoming).