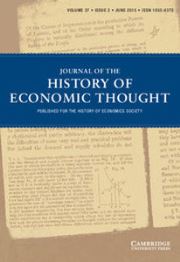 Symposium: American Political Economy From the Age of Jackson to the Civil War