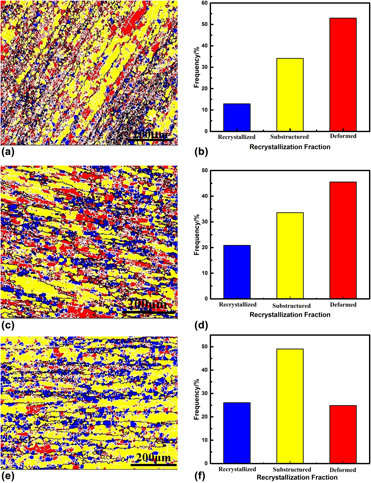 Differences in pipe wall microstructure at various positions throughout the wall thickness of high strength aluminum alloy thick-wall pipes produced by reverse hot extrusion were investigated. The microstructures of the inner wall (IW), outer wall (OW), and half wall (HW) were compared. Further, heterogeneity in the mechanical properties of the pipe throughout the wall thickness was also investigated. Results revealed that the volume fraction of precipitation was highest at the HW position because of the higher Zn and Mg contents. Further, approximately 26% of grains were recrystallized in the OW position due to the greater strain during extrusion, while the recrystallization fractions of the IW and HW positions were 13% and 21%, respectively. The effects of precipitation strengthening and deformation strengthening contribute to the highest ultimate tensile strength and Vickers hardness of the HW position, and to the higher elongation of the IW and OW positions.