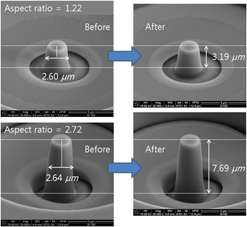 Microcompression test was applied to determine the Young’s modulus for elastically anisotropic materials for two different orientations of single crystalline Si. Although there is a clear difference in the apparent Young’s moduli for the different orientations, a significant underestimation of Young’s modulus was observed resulting from the substrate deformation as observed in both finite element simulation and experiment. This effect decreases with increasing aspect ratio. To correct the deviation of the apparent Young’s modulus from the theoretical values, a systematic framework of microcompression test is suggested. The modified Sneddon correction using the indentation modulus instead of Young’s modulus successfully yields Young’s moduli of single crystalline silicon in the [100] and [111] directions to within 5.3% and 2.0% deviation, respectively.