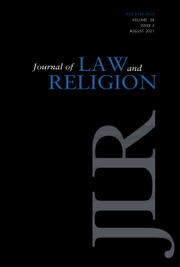 Book Review Symposium: A Secular Age Beyond the West

Book Review Symposium: Who's the Bigot?