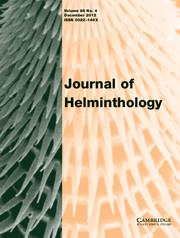 Note: Nucleotide sequence data reported in this paper are available in the EMBL, GenBank and DDBJ databases under the accession numbers AB622276 (cob) and AB622277 (cox1).