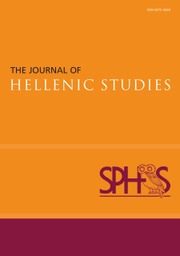 The Population of Athens Again

Professor A. H. M. Jones in the appendix to his new book (pp. 161–80), Athenian Democracy (see below, p. 182), tackles afresh the problem of the population of Athens during the Peloponnesian war, and introduces three novelties: that the 13,000 hoplites of Thucydides ii 13.6 mean hoplites of the age-classes 20 to 39, not 20 to 49 as most of us, if not all, have assumed from Lykourgos, Leokrates 39–40, and some other evidence; that klerouchoi (but not apoikoi) remained in Athens, drawing rents from their kleroi in the subject states, all now within the hoplite census and included in the 13,000; and, the most important of the three, that to get a true picture of mortality rates and so of the relative strengths of different age-classes we must liken the Athenians to certain groups of persons in the Roman Empire between the first and third centuries A.D. and to India at the beginning of the present century, not to any European country during the last hundred years.

Jones takes me to task for suggesting that the at first sight surprising number of ‘oldest and youngest’ in the reserve to whom during the war was allotted the defence of the walls (Thuc. ii 13.7) was in part to be accounted for by the inclusion of all those in the classes 20 to 49 who were not fit for active service in the hoplite ranks, who would be a source of weakness rather than of strength to an army. ‘There are serious objections to this theory’, he says (p. 162). ‘It is in the first place not what Thucydides says. Secondly, it is pure speculation, unsupported by any evidence.’ ‘Let us then’, he adds, ‘set aside this theory and examine the facts afresh.’ This promises well.

1 He accepts the rigid application of the distinction between κληροῦχοι and ἄποικοι made by Meritt, , Wade-Gery, and McGregor, in ATL iii 285–6.Google Scholar But see Ehrenberg, in CP xlvii (1952) 143–9.Google Scholar

2 These are not, I think, one class only, the old, as Burtt translates in the Loeb edition, in spite of

3 I am at a loss to know what Jones means by ‘Thucydides' language [at ii 13. 6–7 evidently] implies that because of the exceptionally heavy demands of defence, the number of men allocated to it was increased during these years’. Which years? If the Archidamian war, or 413 to 404 as well, this meets my point that metics did not then normally serve abroad—they could at Delion because it was an urgent and exceptional campaign and other foreigners served too, and because there was no Peloponnesian invasion that year. I agree of course that ‘the rules governing the employment of … the metics … might vary according to circumstances’; but I am surprised that Professor Jones does.

5 In fact I think that the evidence is in favour of the view that Aristophanes lived till c. 375 at least, if his son Araros first competed with a couple of plays given him by his father and first produced c. 374 (see Pros. Att.); but he was not very active after 388.

6 Plut. Phok. 28.7; Diod. xviii 18.5. Jones says in a note that he cannot understand my argument (Population 18) that Diodoros' figure is alone consistent with those which he gives for the Lamian war; for the latter ‘refer to hoplites only’. Whether I am right or wrong, my argument is clear enough: unlike Jones, I think (p. 8) the figure of 7,700 active service hoplites of 20 to 39 years of age implies about 14,000 to 15,000 hoplites living between the ages 18 and 60, and, if 21,000, Plutarch's figure, were the true number of the whole male population over 18 (or even over 20), this would leave an improbably small number for the thetes. In addition, a large number of those disfranchised in 322 were settled in Thrace; a good many of those who stayed presumably joined in the emigration to Asia that followed Alexander's conquests; yet 21,000 citizens remained in the census of Demetrios (c. 314 B.C.).

The Population of Athens Again
×

The Population of Athens Again
×

The Population of Athens Again
×
×