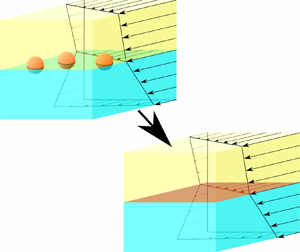 The effective dilatational and shear viscosities of a particle-laden fluid interface are computed in the dilute limit under the assumption of an asymptotically vanishing viscosity ratio between the two fluids. Spherical particles with a given contact angle of the fluid interface at the particle surface are considered. A planar fluid interface and a small Reynolds number are assumed. The theoretical analysis is based on a domain perturbation expansion in the deviation of the contact angle from

$90^{\circ }$ up to the second order. The resulting effective dilatational viscosity shows a stronger dependence on the contact angle than the effective shear viscosity, and its magnitude is larger for all contact angles. The limits of validity of the theory are discussed.