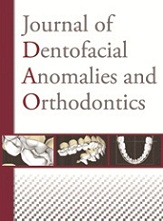 Journal of Dentofacial Anomalies and Orthodontics

The relationship between English and French is complicated by the abundance of false cognates found in each language. The word evidence, first appears in the XIVth century, in both French and English literature and means: that which becomes visually apparent (from the Greek εἴδω, or from Latin ex-videre “to see”); that which is perceived; that which is grasped by the mind; that which is obvious, indisputable, clear, patent.