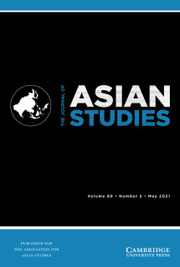 Forum—Power and Agency: The Discipline-Shifting Work of James C. Scott