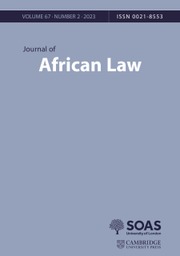 The courts in Ghana and Nigeria apply indigenous customary law in a large proportion of cases, particularly those involving family relationships or land. During the past century the courts have done much to clarify this law and adapt it to rapidly changing social conditions. One such adaptation is the subject of this article. The English doctrine of acquiescence has been imported to fill what appeared in new circumstances to be a deficiency in the customary land law. The doctrine had been used to perform functions different from those which it has performed and is performing in English land law. This article seeks to compare the different characteristics the doctrine has assumed in the three countries, and to draw some conclusions from the experience of Ghana and Nigeria.

2 While there exist many systems of customary law in Ghana and Nigeria, the courts normally assume that they have certain common principles, including those relevant here. “Customary law” will therefore be referred to in the singular.

page 42 note 5 See, e.g., Ramsden v. Dyson (1866), 1 H.L. 129, at pp. 140–141, per LordCranworth, L.C. LordKingsdown (dissenting), at pp. 170–171, appears to have been referring to promissory estoppel. However it is not suggested that the difference in formulation accounts for the divergence of opinion on the decision. This resulted from different views as to inferences of fact.

page 44 note 1 There appears to have been no significant public discussion of the question in either country at the time the courts first acted. In 1927 a Civil Proceedings Limitation Bill applicable to customary law was introduced into the Gold Coast Legislative Council by the government, but debate was postponed for further public discussion, and it was not reintroduced: Gold Coast Legislative Council Debates, 1927–8, 333–336, 342. In public discussions it was objected that the Bill was contrary to customary ideas, and would be abused: Meek, C., Land Law and Custom in the Colonies, London, 1949, 25.Google ScholarCf. Maine, H., Ancient Law, London, 1st edn., 1861, chap. VIII, saying that English law did not accept limitation and prescription until the seventeenth century, the influence of canon law being against them.Google Scholar

page 46 note 5 Sarbah, J., Fanti Customary Laws, 2nd ed., London, 1904. At p. 70 he stated: “Custom does not permit any person to be improved out of his land”. Here he was concerned with improvements by a licensee, not a pledgee, and the maxim is in any case not without exceptions in modern law, as will appear below. At p. 84 he wrote: “Once a pledge or mortgage, always a pledge or mortgage”. Here, however, he was concerned with the pledgee's power of sale, and was stating that on the exercise of the power the pledgee must pay to the pledgor the balance of the price after satisfying the debt. The common-law maxim is concerned with clogs placed on the equity of redemption by a mortgage agreement. English law allows a mortgagor to release his equity of redemption to the mortgagee, and would therefore, it is submitted, hold that he loses it by acquiescence.Google Scholar

page 47 note 8 Cf. Hopgood v. Brown, [1955] 1 W.L.R. 213, at pp. 223–224, per Evershed, M.R. This seems to be a departure from the rule, although the decision might be explained by the fact that the estopped party adverted his mind to the possibility of a mistake, and decided not to ascertain or insist on his rights. Jenkins and Morris, L.JJ., appear to have regarded the case as one of promissory estoppel, as is shown by their references to passages from the judgment of Campbell, L.C., in Cairncross v. Lorimer (1860), 3 L.T. 130. It is submitted that the latter view is a more realistic interpretation of the parties' conduct.

page 48 note 4 See Ellis v. Rogers (1885), 29 Ch.D. 661, holding in effect that constructive notice of facts was insufficient to establish waiver, which required intention as well as notice. An intention to encourage the mistaken belief may be presumed when this is the probable result, as stated below. But it has never been suggested that this presumption may be based on merely constructive knowledge of the circumstances.

page 48 note 8 Bassey v. Eteta (1938), 4 W.A.C.A. 153 (on the similar principle of waiver, holding that a family was not bound by the act of its head in accepting payment to waive a right of action); Bruku v. Ocansey, unreported judgment of the West African Court of Appeal, delivered on March 23rd, 1953 (holding that a family was not bound if neither the head nor his agent had been guilty of encouraging the mistaken belief); Ohimen v. Adjei (1957), 2 W.A.L.R. 275, at pp. 280–281 (also on waiver); Kasunmu & James, op. cit., 63. In Appiah v. Dansoa (1954), D.C. (Land) ’52–’55, 246, it was implied that a family might have been bound if the head had known, the court considering that the head acting alone could alienate family property for his lifetime. Allott, A., Essays in African Law, London, 1960, 304–305, states that knowledge of one member is imputed to the whole family after a lapse of time, but the two cases he cites do not seem helpful on the point.Google Scholar

page 52 note 3 Hopgood v. Brown, [1955] 1 W.L.R. 213; Nwokobi v. Nzekwu, [1964] 1 W.L.R. 1019, at p. 1024. Cf. Maudsley, op. cit., 298, arguing that it would cause great injustice to hold the estoppel binding on the purchaser of a legal estate for value without notice of the estoppel. It is submitted that it would cause equally great injustice to the party relying on estoppel to hold otherwise; and that since, as the writer admits, this type of estoppel is binding at common law, there is no basis for reducing it to the status of an equitable principle.

page 52 note 5 Cf. Bower, 15–17, arguing that the doctrine cannot confer a legal title or right against the whole world. It is true that a third party may establish a right which is superior to that of either of the two persons originally concerned in the acquiescence, and which is not barred by estoppel. However, this merely illustrates the principle that rights in land may be relative. If A executes a conveyance of land to B, we say that B acquires title from A, even though it is always possible that an outsider, C, may be able to prove a better title than A or B.

page 53 note 2 Suleman v. Johnson, supra. Cf. Kasunmu & James, op. cit., 77–81. It is submitted that the authors misinterpret that decision. They say (at pp. 78 and 80) that the appeal court reversed the decision of the trial court, and held that the title of the original owner had not passed to the occupier. The report states that the appeal was dismissed, the appeal court upholding the refusal of a declaration of title, and holding (at p. 216) that the original owners were not entided to rely on customary law “to support their claim to any rights of ownership whatever”.

page 55 note 1 This solution seems to have been approved in The Earl of Oxford's Case (1615), 21 E.R. 485. Today, however, damages are awarded only if an estoppel cannot pass a good title; this may happen if there was an express representation, as in Seton v. Lafone (1886), 18 Q.B.D. 139. Such cases are not relevant to acquiescence, for which a good title in the acquiescing party is essential. Ollennu, J., has sometimes stated that estoppel operates only if the mistaken party cannot be compensated in money: Tetteh v. Doku, [1961] G.L.R. 566; Lartey v. Hausa, [1961] G.L.R. 773; Ollennu, op. cit., 67. However, in no case have damages been awarded, and in a recent case where damages only were claimed, the court held that this remedy was not available: Attafah v. Tawiah (1968), C.C. 25.

page 57 note 4 Since the Acts apply only when the occupier would be deprived of possession, they cannot apply when all the conditions for estoppel are present. This, it is submitted, answers the criticism of the Acts by Bentsi-Enchill, op. cit., 273, 276, that acquiescence adequately deals with the problem sought to be solved.

page 57 note 5 Cf. Bentham, “Principles of the Civil Code”, Works, Vol. 1, 1843, 328: “The principle of caprice, having no regard to the measure of pains and pleasures, gives all to one of the parties, without caring for the other. The principle of utility, desirous of reducing to the lowest term, an inevitable consequence, weighs the two interests, seeks a method of reconciling them, and prescribes indemnities. It awards the article to that one of the two claimants, who would lose most if his claim were rejected, but subject to the charge of giving to the other a sufficient indemnity”.

page 58 note 1 The experience with English conveyances in Ghana and Nigeria has been similar. The English case-law has provided rules as to the formalities to be complied with, but the courts have had to build up a body of precedent on the effect of documents executed by illiterates, or purporting to be on behalf of customary-law corporations.

page 58 note 2 Cf. the reluctance of the Ghanian courts to allow legislation to modify the customary-law pledge: Woodman, op. cit., 15–18.