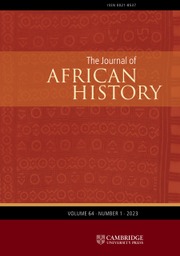 Slavery and Seclusion in Northern Nigeria: A Further Note 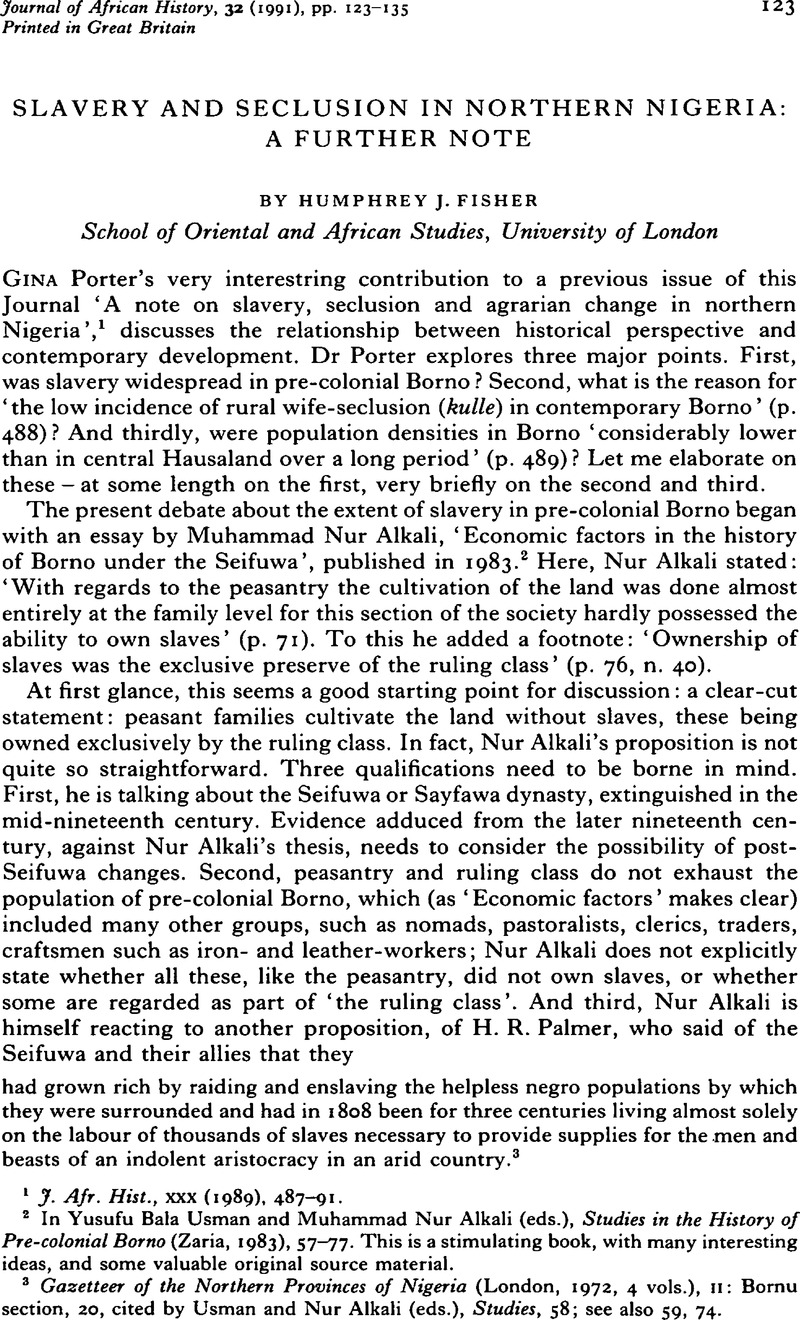 2 In Usman, Yusufu Bala and Alkali, Muhammad Nur (eds.), Studies in the History of Pre-colonial Borno (Zaria, 1983), 57–77.Google Scholar This is a stimulating book, with many interesting ideas, and some valuable original source material.

5 Nachtigal's account of his five-and-a-half-year travels, Sahara and Sudan, is now available in a complete, annotated English translation, by A. G. B., and Fisher, H. J., published by Hurst, Christopher of London in four volumes: 1. Tripoli, Fezzan and Tibesti (1975); 2.Google ScholarKawar, Bornu, Kanem, Borku, Ennedi (1980);.3.Google ScholarThe Chad Basin and Bagirmi (1987); 4.Google ScholarWadai and Darfur (1971). Subsequent references, where not otherwise indicated, are to Sahara and Sudan.

6 Nachtigal arrived, from the north, on Lake Chad on 27 June 1870; he left Kuka, capital of Borno, travelling east towards the Nile, on 1 March 1873. The last Seifuwa claimant had been executed in 1846.

8 Curiously, Dr Porter herself seems not to have marked and inwardly digested Nachtigal as perhaps she should: the ‘Note’ cites (though a typographical slip has crept in) the two references given in my review article, but adds only one, of somewhat oblique relevance, of her own, n. 16 on p. 490—plus some references in n. 15, to translation inadequacies in P. A. Benton.

9 They are gathered in A. G. B., and Fisher, H. J., Slavery and Muslim Society in Africa (London, 1970).Google Scholar We missed one reference (III. 367) to the Fellata visitors who ‘supplied with butter those who possessed small children for purchasing it’, not recognizing at first reading that the children were being exchanged for the butter. The cattle nomads, who, if they did not already have some slaves, were thus joining the ranks of the slave-owners, seem unlikely to have been prominent among ‘the ruling class’.

26 Dr Porter raises the interesting question: how far were nineteenth-century visitors, Nachtigal among them, constrained by an urban bias, arising from the difficulty of learning about rural society ‘from their capital city residences and their mainly urban elite contacts’ (491). Nachtigal spent a considerable time, probably more than most other travellers, outside cities, in his journeying in Borno and adjacent regions. Further, urban bias, which does no doubt influence the nineteenth-century reports, seems more likely (as I think Dr Porter herself implies) to under- rather than to over-estimate the extent of rural slavery.

31 II 215 & ff.; see also p. 222, for market controls. Slaves also attended the market in considerable numbers (II. 220–1), just as they were among the crowds thronging the dendal or main square (II. 155); to be sure, some of these slaves must have belonged to the ruling class.

32 In ‘Sudanese and Saharan studies’, 290, I also queried Nur Alkali's final conclusion, that ‘The issue of slave raids and slave trade…is peripheral to the study of the economic factor in the history of Borno under the Seifuwa’ (p. 74); but this issue does not form part of Dr Porter's argument in the ‘Note’, and accordingly I do not myself pursue it further here.

44 III. 114n. This reference is considerably later than Nachtigal's own time.

51 III. 334–5, 348. These promptly escaped. Nachtigal (III. 364–5) had to fend off, again from the Bagirmi ruler, first ten elderly men and women slaves, then ten younger slaves (sedâsîya, six spans high), next a wife of the king (she had been surprised in an indiscretion), and finally a recently captured girl of about 16. But Nachtigal was obviously a special case.

53 See also II. 334, for an aged widower among the Awladc Sulayman, ‘completely under the thumb of a young slave girl, who looked after his simple housekeeping for him’.

61 Ibid. 76, n. 40. It is also difficult to square with Dr Porter's suggestion that Brenner, ‘seems to imply’ that ‘slaves were basically confined to the slave farms of the royal and noble classes in Borno’ (‘Note’, 489).Google Scholar

64 Ibid. II. 418. Barth goes on here to describe an additional surreptitious raid, upon Borno's own Musgu allies, yielding as ‘a sort of tribute’ 800 more slaves. The commander-in-chief claimed all these for himself, but it is not clear just how many he actually got, since some were rescued the following night, and also ‘about 200 of the oldest and most decrepit women’ were given back.

68 The proper distribution of booty was notoriously difficult, at every time and in every place throughout the political and military history of Islam in sub-Saharan Africa. A concentrated study of this theme, and of the equally complex relationship between theory and practice in the rightful acquisition of booty in the first place, might prove a rewarding research field.

69 III. 346 n., 355 & n. Slightly different distribution rules applied to the Shuwa Arabs: ‘For military enterprises, all Shuwa tribes have to render military service, and each man is entitled to half his booty if it consists of slaves, horses or cattle, and to the whole if it is a question of inanimate objects (clothing, ornaments, etc.); only the captured weapons fall exclusively to the [Borno] government’ (III. 178).

74 The broader distribution of slaves was carried further by the trickle-down effect, discussed earlier in this paper, of slaves lost by the returning raiders.

78 Ibid. 489. Another demographic factor helping to mould the position of women, but irrespective of the proportion of slaves in the population, is this: if, as Dr Porter suggests, population density is low, then women are confirmed in a spirit of independence, knowing that, should they withdraw from unsatisfactory marriages, they will find ‘a ready demand for their labour elsewhere…The question of purdah does not arise’ (Ibid. 490).

82 Ibid. III. 388. Al-Kanami himself paid compensation to the slave-owner, since the wife had been the initiator of the offence.

85 I have cited only a few examples; many more might be gathered, and might illuminate the evolution of nineteenth-century Bornoan Islamic policy concerning women—a promising topic, perhaps, for a thesis or research project. Al-Kanami himself emerges as a rather enigmatic figure. The details given above suggest an austere, cruel man: but he vigorously rebutted the accusation, levelled against Borno by the Sokoto reformers, that a free woman praying with her head uncovered was a sign of unbelief (Thomas Hodgkin, Nigerian Perspectives: an Historical Anthology [Oxford, 1960], 200) and, in a quite extraordinarily romantic poem, he publicly rejoiced in the rescue of his favourite woman (presumably a slave concubine), who had apparently fallen into the hands of the Bagirmi, near neighbours and frequent enemies of Borno (Ibid. 208–9). In Nachtigal's time, there was still some evidence of seclusion: one of his closest associates vainly tried to fend off the unwelcome offer of a new wife by insisting ‘that he would by no means permit her the freedom customary in Kuka either to go out or to receive visits from the parental family’ (III. 60)—but the reference to ‘the freedom customary in Kuka’ shows what the normal pattern was. There is little or no sign, in Nachtigal's account, of brutality being used in the control of women (possible exceptions include II. 448, III. 390, but both these are hearsay, and remote from Borno). Shaykh Umar, son and successor of al-Kanami, was far too gentle a man.

86 Another instance of over-emphasis on demography, or any other such secular determinant, at the expense of religion, is to be seen in Dr Porter's comment on the fact that sons of non-Kanuri slave women were considered (at least in theory) full members of Borno society. This, she says, ‘seems to suggest a perceived need for population expansion’: but it might equally well be the result of Islamic family law, where (again at least in theory) the children of a free Muslim father are equal, regardless of whether their mothers are free or slave. Porter, Dr (490 and n. 17) cites R. Cohen, ‘Incorporation in Bornu’, in Cohen, R. and Middleton, J. (eds.), From Tribe to Nation in Africa (Scranton, 1970), 162.Google Scholar

94 Brenner, , Shehus, 81–2Google Scholar and n. 37, 112–3. This argument needs some modification in detail. Al-Hajj Bashir had been killed in December 1853 (Barth, , Travels, II. 42)Google Scholar, during a briefly successful coup d'êtat by a brother of the Bornu ruler. The usurper himself was soon overthrown and executed in December 1854 (III. 154–5). The refugees whom Vogel met next month are likely to have been fleeing from civil war, and some indeed, as Vogel's report suggests, from Laminu in particular; but Laminu could no longer have been operating on behalf of al-Hajj Bashir, dead for more than a year.

96 Alexander de Waal's book, Famine that Kills: Darfur, Sudan, 1984–1985 (Oxford, 1989)Google Scholar, includes an interesting albeit brief discussion of the assimilation into the Fur people of immigrant strangers. He also remarks on the efforts of the Anglo-Egyptian Condominium, worried about ‘detribalization’, to prevent such ethnic change, with only limited success. What has been effective in blocking assimilation in more recent times appears to be the shortage of land for allocation to immigrants (pp. 47–9).

Cooper, Barbara M. 1994. Reflections on Slavery, Seclusion and Female Labor in the Maradi Region of Niger in the Nineteenth and Twentieth Centuries. The Journal of African History, Vol. 35, Issue. 1, p. 61.
Google Scholar Citations

Slavery and Seclusion in Northern Nigeria: A Further Note
×

Slavery and Seclusion in Northern Nigeria: A Further Note
×

Slavery and Seclusion in Northern Nigeria: A Further Note
×
×