Jurisdictional Perspectives on Alternative Dispute Resolution and Access to Justice 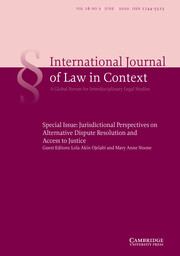