Celebration of Peter Fitzpatrick and his Scholarship 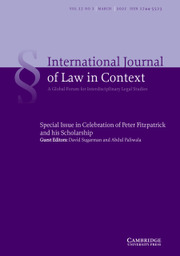 Special Issue in Celebration of Peter Fitzpatrick and his Scholarship