Associations of facility-level antibiotic use and hospital-onset Clostridioides difficile infection in US acute-care hospitals, 2012–2018

Although the number of cases of Clostridioides difficile infection (CDI) in the United States has decreased in recent years, Reference Guh, Mu and Winston1,Reference Turner, Grambow and Woods2 disease burden remains high, Reference Magill, O’Leary and Janelle3 and the Centers for Disease Control and Prevention has recently declared CDI an urgent public health threat. Reference Ouchar Mahamat, Lounnas and Hide4 Decreases in hospital-onset CDI (HO-CDI) rates have occurred despite relatively stable national rates of overall inpatient antibiotic use. Reference Baggs, Fridkin, Pollack, Srinivasan and Jernigan5,Reference Baggs, Kazakova and Hatfield6 Previously, we reported the association between hospital-level antibiotic use rates and HO-CDI rates in acute-care hospitals (ACHs) from 2006 to 2012. Reference Kazakova, Baggs and McDonald7 In this analysis, we reexamined the cross-sectional and temporal associations between hospital-level antibiotic use and HO-CDI rates using more recent data from a separate cohort of ACHs.

We used adult hospital discharge and inpatient charge records for antibiotic use, CDI tests and treatment from ACHs contributing to the Premier Healthcare Database from January 1, 2012, to December 31, 2018. A case of HO-CDI was defined as a hospital discharge with an International Classification of Diseases (ICD) code specifying enterocolitis due to Clostridioides difficile (ICD-9 008.45 or ICD-10 A04.7, A04.71, or A04.72) in any secondary diagnostic position and inpatient treatment with metronidazole (parenteral or oral), fidaxomicin, or vancomycin (oral) initiated on hospital day 3 or later after admission. Facility-level monthly rates of HO-CDI were calculated per 10,000 patient days (PD). Hospital antibiotic use was measured by days of therapy (DOT) per 1,000 PD and examined through monthly rates of total antibiotic use and use of 7 antibiotic classes: fluoroquinolones, third- and fourth-generation cephalosporins (cephalosporins), piperacillin-tazobactam, carbapenems, β-lactam/β-lactamase inhibitor combination (excluding piperacillin-tazobactam), clindamycin, and penicillins. In addition, we evaluated combined use of 3 high-risk antibiotic classes: fluoroquinolones, cephalosporins, and carbapenems.

The cross-sectional relationships between facility-level rates of HO-CDI and antimicrobial use were examined through multivariable generalized estimating equation (GEE) models accounting for autocorrelation between monthly HO-CDI rates within a facility, negative binomial distribution, annual trend, month of discharge, and included a natural log of patient day as offset. All GEE models adjusted for hospital confounders: urban or rural location, bed size, teaching status, census division, primary nucleic acid amplification test (NAAT) utilization, proportion of patients aged ≥65 years, average Gagne comorbidity score, Reference Gagne, Glynn, Avorn, Levin and Schneeweiss8 patient case-mix index, proportion of discharges with a surgical diagnosis-related group (DRG), and community-onset CDI (CO-CDI) cases per 100 discharges. A case of CO-CDI was defined as a discharge with a ICD-9 or CD-10 diagnosis code for CDI in the primary position, no prior hospitalization in the same facility in 28 days, and inpatient CDI treatment initiated at any time during hospitalization. NAAT testing was assessed using inpatient charges for C. difficile tests where each test was categorized as NAAT if its description contained “NAAT.” “PCR,” “amplified,” or “DNA.” All other C. difficile tests were categorized as “non-NAAT.” NAAT primary utilization was defined quarterly as a binary variable. If all C. difficile tests in a given quarter included an NAAT test, a hospital was considered to have primary NAAT utilization; otherwise, a hospital was considered not to have primary NAAT utilization. 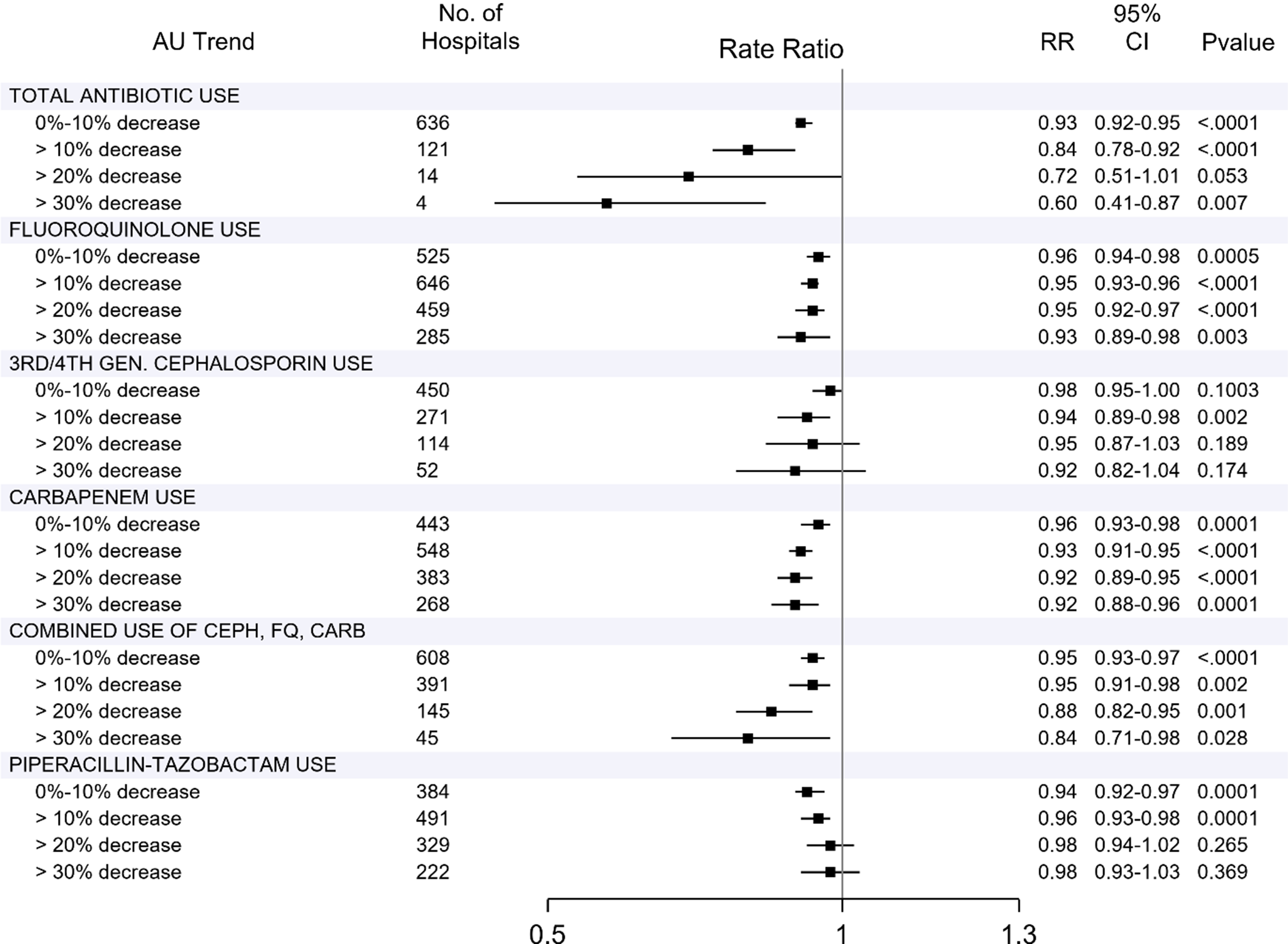 In this ecologic analysis, we used 2012–2018 data from a large cohort of ACHs to identify significant associations between facility-level HO-CDI rates and antibiotic utilization. Specifically, higher levels of total antimicrobial use as well as use of third- and fourth-generation cephalosporins, carbapenems, and piperacillin-tazobactam were associated with higher rates of HO-CDI. Decreases in total antibiotic use, fluoroquinolones, carbapenems, and combined use of fluoroquinolones, third- and fourth-generation cephalosporins, and carbapenems corresponded with decreases in HO-CDI. This analysis builds upon our previous investigation by confirming associations identified in a different hospital cohort over a different period and by adjusting for a confounder not previously available, that is, hospital-level use of a more sensitive NAAT diagnostic test. Although NAAT utilization was derived from administrative data, which is subject to several previously described limitations, Reference Kazakova, Baggs and McDonald7 its temporal association with HO-CDI indicates the importance of including this factor in HO-CDI models (Supplementary Fig. 2 online).

Like our previous study, the largest reductions in HO-CDI rates were identified in a small set of ACHs that decreased their total antibiotic use by 30%. These findings are also similar to those of a study by Rhea et al Reference Rhea, Jones and Endres-Dighe9 showing that a simulated 30% reduction in antibiotics prescribed across all inpatient and outpatient locations of a regional network was associated with a 17% decrease in HO-CDI. Given reports of widespread inappropriate use, reductions in total antibiotic use of this magnitude are potentially feasible, particularly among hospitals with high antibiotic use. Reference Fridkin and Fagan10 Although decreasing total antibiotic use is an attractive goal, our findings suggest that important reductions in HO-CDI rates may be achieved with a more targeted approach that focuses on combined use of cephalosporins, fluoroquinolones, and carbapenems. Hospitals with a ≥30% decrease in the combined use of those antibiotics observed a 16% decrease in the HO-CDI. This approach may also help prevent substitution of fluoroquinolones by other broad-spectrum antibiotics such as cephalosporins, an occurrence evident in recent reports on antibiotic use trends. Reference Baggs, Fridkin, Pollack, Srinivasan and Jernigan5,Reference Baggs, Kazakova and Hatfield6 Although specific reasons for and factors driving the changes in antibiotic use in our hospital cohort were beyond the scope of this investigation, we found that decreased antibiotic use consistently corresponded with decreases in the HO-CDI rate. These findings should encourage ACHs to invest efforts into monitoring antibiotic use and targeting unnecessary and inappropriate use across all classes of antibiotics.

Our study, utilizing a new cohort of hospitals during more recent years, continues to identify associations between hospital-level antibiotic use and the HO-CDI rate and suggests that reducing antibiotic use, in conjunction with other infection control and prevention measures, can reduce facility-level rates of HO-CDI.

The findings and conclusions in this report are those of the authors and do not necessarily represent the official position of the Centers for Disease Control and Prevention.

This work was supported through salary funds from the Division of Healthcare Quality Promotion (DHQP) of the Centers for Disease Control and Prevention.

The authors have no conflicts or other relevant financial support to report.

PREVIOUS PRESENTATION: These findings were presented in part at the SHEA 2019 Annual Meeting on April 24, 2019, in Boston, Massachusetts. 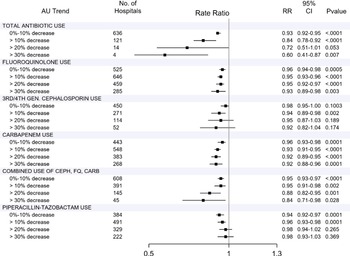 Associations of facility-level antibiotic use and hospital-onset Clostridioides difficile infection in US acute-care hospitals, 2012–2018
×

Associations of facility-level antibiotic use and hospital-onset Clostridioides difficile infection in US acute-care hospitals, 2012–2018
×

Associations of facility-level antibiotic use and hospital-onset Clostridioides difficile infection in US acute-care hospitals, 2012–2018
×
×