Curses in Context IV: Curse Tablets in the Wider Realms of Execrations, Commerce, Law, and Technology 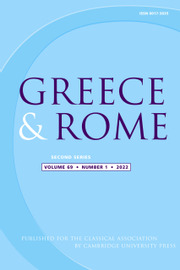