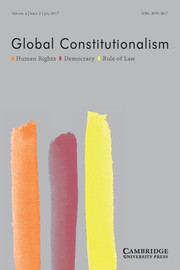 Special Issue: Independence in a World of Intersecting Legal and Political Regimes