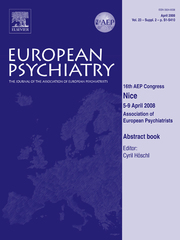 Symposium: Pathways to care and the immigrant patient: Ethical perspectives from cultural psychiatry