Precision medicine in psychiatry is based on the identification of homogeneous subgroups of patients with the help of biosignatures—sets of biomarkers—in order to enhance diagnosis, stratification of patients, prognosis, evaluation, and prediction of treatment response. Within the broad domain of biomarker discovery, we propose retinal electrophysiology as a tool for identification of biosignatures. The retina is a window to the brain and provides an indirect access to brain functioning in psychiatric disorders. The retina is organized in layers of specialized neurons which share similar functional properties with brain neurons. The functioning of these neurons can be evaluated by electrophysiological techniques named electroretinogram (ERG). Since the study of retinal functioning gives a unique opportunity to have an indirect access to brain neurons, retinal dysfunctions observed in psychiatric disorders inform on brain abnormalities. Up to now, retinal dysfunctions observed in psychiatric disorders provide indicators for diagnosis, identification of subgroups of patients, prognosis, evaluation, and prediction of treatment response. The use of signal processing and machine learning applied on ERG data enhances retinal markers extraction, thus providing robust, reproducible, and reliable retinal electrophysiological markers to identify biosignatures in precision psychiatry. We propose that retinal electrophysiology may be considered as a new approach in the domain of electrophysiology and could now be added to the routine evaluations in psychiatric disorders. Retinal electrophysiology may provide, in combination with other approaches and techniques, sets of biomarkers to produce biosignatures in mental health.

This is an Open Access article, distributed under the terms of the Creative Commons Attribution licence (http://creativecommons.org/licenses/by/4.0), which permits unrestricted re-use, distribution and reproduction, provided the original article is properly cited.
Copyright
© The Author(s), 2022. Published by Cambridge University Press on behalf of the European Psychiatric Association

Psychiatry is the last medical field almost exclusively based on subjective clinical evaluation without the help of quantitative biomarkers for diagnosis, stratification and classification of patients, prognosis, evaluation, and prediction of treatment response and detection of subjects at high risk of psychiatric disorders [Reference Insel and Cuthbert1]. This is holding back the development of precision medicine in psychiatry, which is based on the identification of homogeneous subgroups of patients with the help of biosignatures in order to enhance diagnosis, classification, prognosis, and interventions [Reference Insel and Cuthbert1]. To plan the future, we need to revise health care organization which will be based on the use of biological markers based on diverse approaches in order to produce biosignatures with the help of signal biology and computational psychiatry [Reference Insel and Cuthbert1]. Within the broad domain of biomarker discovery, we support that retinal electrophysiology is a promising tool for the identification of biosignatures. Here, we describe how retinal electrophysiology based on electroretinogram (ERG) measurements could be: (a) collected as routine measures for patients; (b) analyzed with robust pre- and post-signal processing (mathematical and machine learning approaches); (c) added to other collected data in patients’ medical record; and (d) added to the sets of biomarkers to produce biosignatures for precision medicine in psychiatry.

The use of signal processing and machine learning tools applied to retinal measurements represents a crucial step in precision psychiatry. Extracting the raw signal ensures an access to all relevant information derived from retinal signal. Analysis of retinal electrophysiological signals is mainly based on amplitude and peak time extracted from waves of interest (mainly a- and b-waves for the fERG and P50 and N95 for the PERG) [Reference Robson, Nilsson, Li, Jalali, Fulton and Tormene4]. Signal processing applied to ERG allows to isolate many other interesting and relevant characteristics from raw data. Since retinal signal may be quite low (few microvolt to millivolt), it can be perturbed by endogenous electrophysiological perturbations sources such as deep brain sources, muscle sources, or energy network. The instrumentation chain ensures the amplification and prefiltering of the signal in the adapted band of the signal before the acquisition. However, this is sometimes insufficient for high-quality ERG. Thus, it is necessary to preprocess the digital data before extracting retinal electrophysiological markers. Specific signal processing may be applied according to each of ERG acquisition. Using more advanced machine learning algorithms can also be applied on ERG signals to enhance retinal markers extraction. The future steps allowed by these techniques are to improve ERG signal quality, wave detection, and identification of retinal electrophysiological markers from ERG recordings. By coupling conventional and machine learning approaches, ERG can give robust, reproducible, and reliable retinal electrophysiological markers to produce biosignatures in precision psychiatry.

We argue here that retinal electrophysiology may be considered as a new approach in the domain of electrophysiology and may provide, in combination with other approaches and techniques, a set of biomarkers to produce biosignatures in mental health. To this end, we need to consider all collected data for each patient. Interestingly, in routine care, more relevant information is already collected by clinicians such as clinical data, biology, neuropsychology, imaging, and electrophysiology. We stress that retinal electrophysiology should now be added to these routine evaluations in mental health to produce biosignatures (Figure 1). To consider all these collected data, the development of systems biology and computational psychiatry based on artificial intelligence techniques is crucial. Two complementary approaches can be considered for these developments: (a) clinical trials allow controlled environments in which clinical characteristics of patients are well known: diagnosis, medication, comorbidity, or not, to name a few and (b) routine care allows gathering of real-word data associated with medical observations and standard questionnaires. Routine care can be fed with predictions from digital twins and assist psychiatrists for better care while continuously improving the numerical models from each patient inclusion. 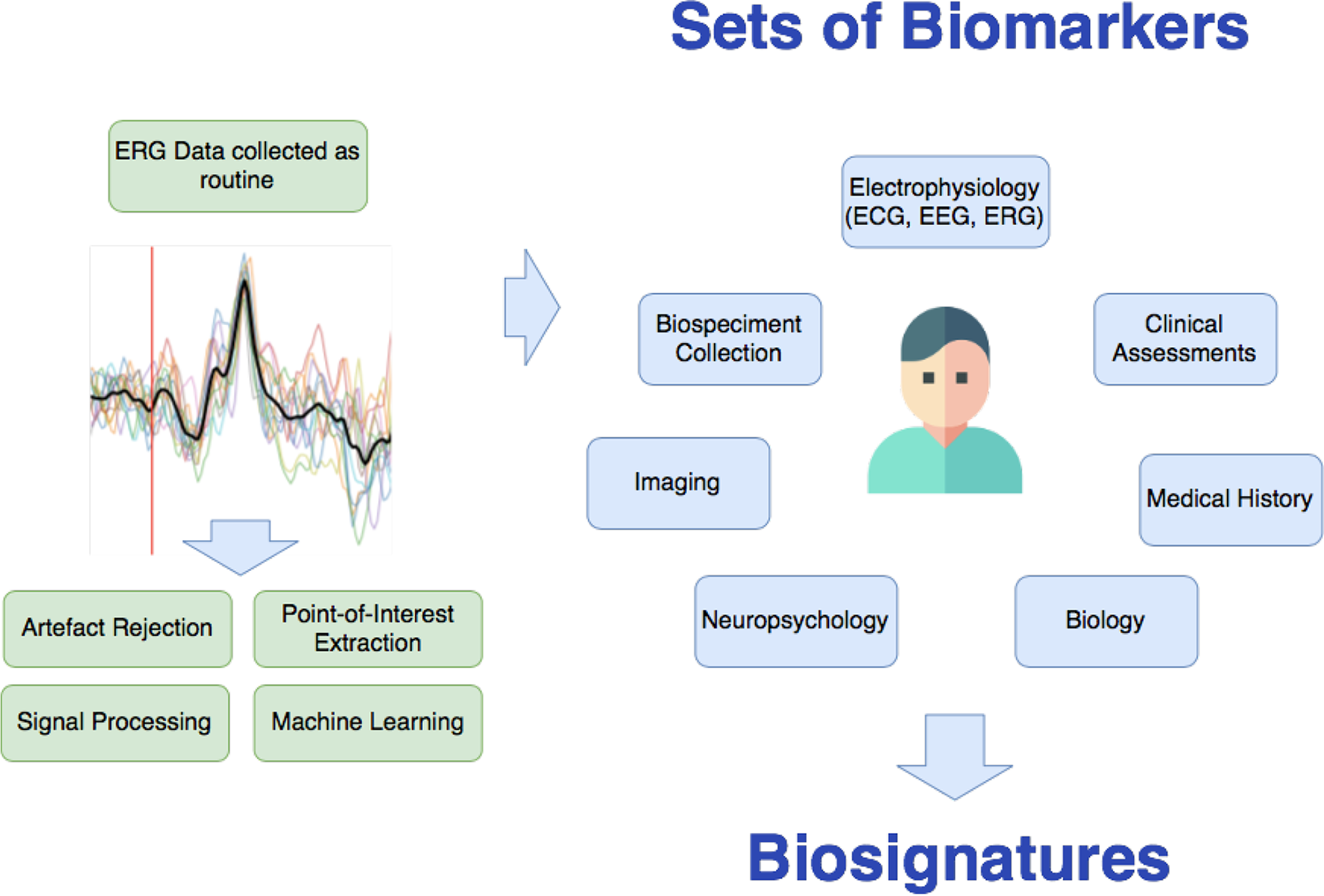 Figure 1. Retinal electrophysiology added in sets of biomarkers to identify biosignatures in mental health.Retinal electrophysiology as measured with ERG and collected as routine measures for patients. Signal processing and machine learning techniques applied on ERG signal. ERG integrated in sets of biomarkers in combination with other approaches and domains to identify biosignatures in mental health.Abbreviations: ECG, electrocardiography; EEG, electroencephalography; ERG, electroretinogram.

Retinal electrophysiology shows great potential for objective assessments in psychiatric disorders and should be studied in various pathological conditions and subgroups of patients with highly reproducible and standardized protocols and measurements. To develop relevant retinal electrophysiological biomarkers, they must be available for routine clinical practices with small footprint, cost-effective, rapid and easy to perform, and highly reproducible. Interestingly, portable and connected ERG devices are available today and can feed routine clinical evaluation. These new retinal devices are easy to use, connected, and secured with semiautonomous remote analysis with interpretations validated by a medical expert ensuring reproducibility and reliability. This chain analysis is particularly adapted for identification and development of biomarker signatures in mental health.

To conclude, retinal electrophysiology is a promising instrument for developing signal processing and machine learning tools that should inform clinical decision for better diagnosis, classification, prognosis, treatment, and detection of high-risk subjects.

All the authors contributed to write the manuscript, concurred with the submission, and have approved the final manuscript.

There is no funding source for this work.

The authors report no biomedical financial interests or potential conflicts of interest. 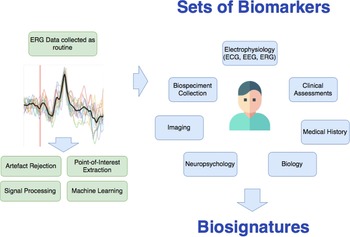 Figure 1. Retinal electrophysiology added in sets of biomarkers to identify biosignatures in mental health.Retinal electrophysiology as measured with ERG and collected as routine measures for patients. Signal processing and machine learning techniques applied on ERG signal. ERG integrated in sets of biomarkers in combination with other approaches and domains to identify biosignatures in mental health.Abbreviations: ECG, electrocardiography; EEG, electroencephalography; ERG, electroretinogram.