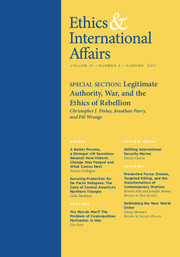 Special Section: Legitimate Authority, War, and the Ethics of Rebellion