The International Journal of Animal Exercise Physiology, Biomechanics and Nutrition 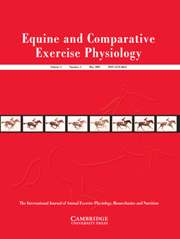