The global outbreak of coronavirus disease 2019 (COVID-19) is greatly threatening the public health in the world. We reconstructed global transmissions and potential demographic expansions of severe acute respiratory syndrome coronavirus 2 based on genomic information. We found that intercontinental transmissions were rare in January and early February but drastically increased since late February. After world-wide implements of travel restrictions, the transmission frequencies decreased to a low level in April. We identified a total of 88 potential demographic expansions over the world based on the star-radiative networks and 75 of them were found in Europe and North America. The expansion numbers peaked in March and quickly dropped since April. These findings are highly concordant with epidemic reports and modelling results and highlight the significance of quarantine validity on the global spread of COVID-19. Our analyses indicate that the travel restrictions and social distancing measures are effective in containing the spread of COVID-19.

The outbreak of coronavirus disease 2019 (COVID-19) [Reference Wang1] caused by severe acute respiratory syndrome coronavirus 2 (SARS-CoV-2) [Reference Gonzalez-Reiche2] has been and is still threatening global public health. The origin of SARS-CoV-2 is still under debate. It is difficult to find the root cause of the disease and different approaches yield contrasting results [Reference Pipes3]. Meanwhile, two studies based on network analyses identified ancestral haplogroup by using sequences of coronavirus from bats as an outgroup [Reference Forster4, Reference Yu5]. However, the reliability of this result is under debate [Reference Sánchez-Pacheco6–Reference Mavian8]. After an outbreak in east Asia, COVID-19 dramatically spread worldwide. The first cases were confirmed in Europe, North America and Oceania in January 2020. In February, the cases were officially reported in all continents. Until May 2020, the officially confirmed cases were reported in more than 200 countries. Up to 1 July 2020, the world-wide outbreak of COVID-19 had caused more than 510 thousand deaths (https://coronavirus.jhu.edu/map.html). Studies based on epidemic models evaluated the transmissions and expansions of SARS-CoV-2 in the world [Reference Chinazzi9–Reference Siedner14], suggesting the likely complex demographic dynamics. However, the direct evidence from population genomic data is lacking. This is critical to trace transmission events and identify community-based outbreaks based on the demographic expansions [Reference Croucher and Didelot15, Reference Volz, Koelle and Bedford16]. After the outbreak of COVID-19, a large number of viral genomes were sequenced and uploaded to the public database (https://www.gisaid.org/). These open resources provide us a chance to examine evolutionary history of the SARS-CoV-2. We can trace the intercontinental transmission and potential demographic expansions against timescales and accompanying travel restrictions in the world. In this study, we evaluated the impact of travel restrictions on the spread of COVID-19 based on genomic information. Meanwhile, we checked if the strong social distancing measures are effective in reducing local demographic expansions of virus.

To reconstruct the evolutionary history of SARS-CoV-2, we downloaded 31 820 full-length genome sequences on 26 May 2020. The sequences were downloaded from the Global Initiative on Sharing Avian Influenza Data (GISAID) (Table S1). We also collected the sampling time of the sequences. As the random sequencing errors could generate a large amount of single site mutation, which would affect the accurate definition of the haplotype and network, we removed all low-quality sequences following the reference [Reference Zhao17]. We filtered the data based on mutation density and numbers of unknown bases (N), degenerate bases and gaps. Mutation density was defined by mutations/slide window size (20nt). The gaps were identified by comparing with reference sequence (MN908947). The unknown bases should be less than 15, the degenerate bases should be less than 50 and the gaps should be less than three. If a sequence contained high mutation density regions (mutation density larger than or equal to 0.25), it would also be treated as low quality.

Construction of phylogenetic tree and network

Based on the sampling date of the genome sequences, we obtained the potential origin time for each haplotype. We set the earliest sampling date as origin time of the haplotype and the sampling dates of sequences in other continents as transmission time. We corrected origin time and place of haplotypes based on the epidemic information, especially the travelling history of the first few confirmed cases of each country. For some haplotypes, the first reported sequences were isolated from patients who had an international travelling history. Therefore, we corrected the origin place as where they may be infected. In total, the origin place of eight haplotypes were corrected (H10, H121, H3196, H2714, H2354, H179, H1565 and H1035). We assumed that the same haplotype or two directly connected haplotypes in the network found in the different continents represented one intercontinental transmission. The links with more than 10 mutations were not involved in the analyses, as it may be caused by sequencing errors.

In total, we downloaded 31 820 full-length genome sequences and 14 206 sequences passed the quality controls. After trimming the ends, the alignment we used was 29 182 bps. The alignment included 6275 variable sites, in which 2757 are potential phylogenetic informative sites. In addition, we identified a total of 7177 haplotypes from all the reported genomes (Table S1). We constructed the phylogenetic tree (Fig. 1a) and the network based on sequences of haplotypes. The overall nucleotide diversity was 0.000098 and the haplotype diversity was 0.996. 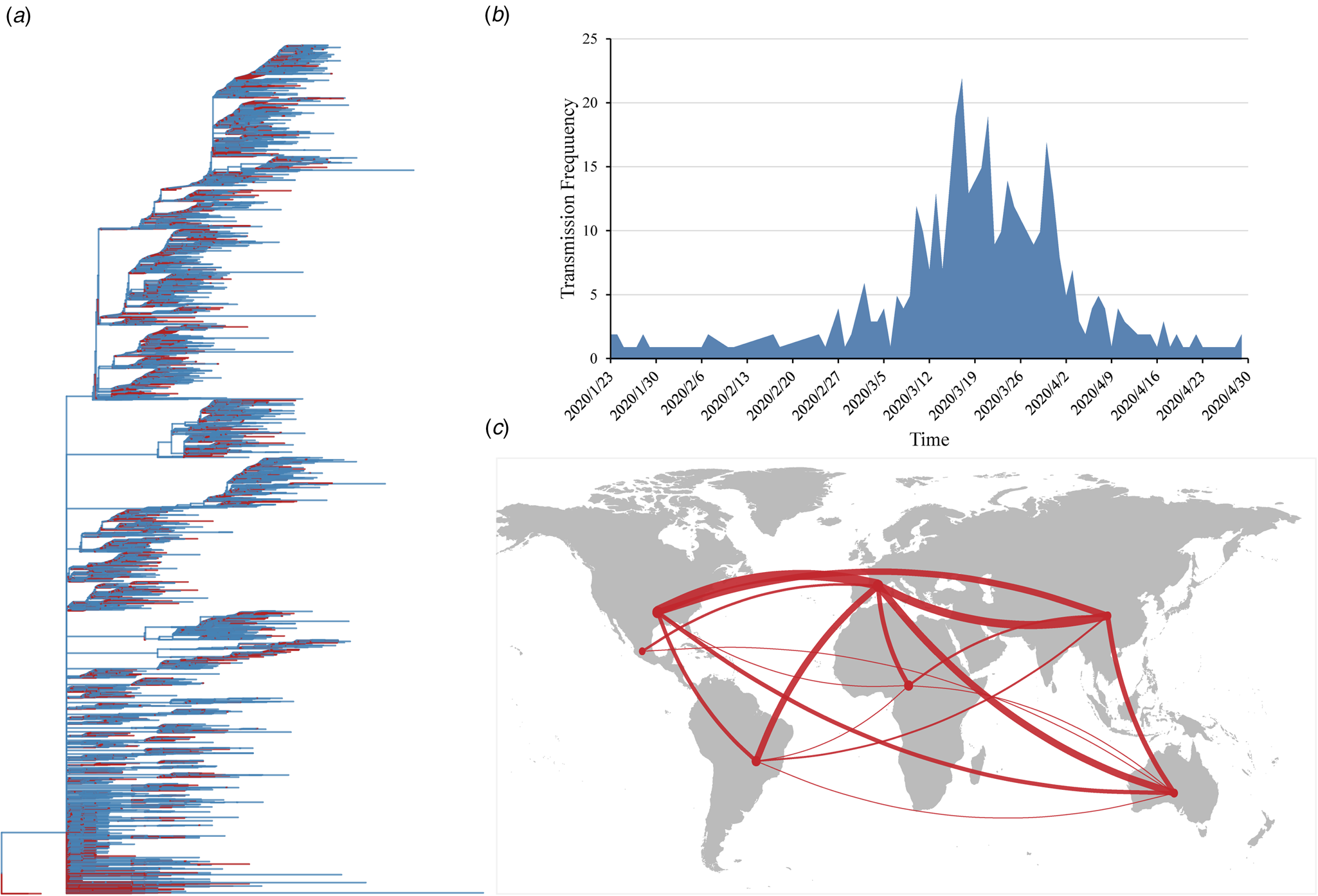 Rapid population expansion because of frequent transmissions of virus will lead to the fixations of rare and random mutation due to founder effect [Reference Croucher and Didelot15, Reference Campbell26]. This will result in the star-phylogeny network, in which rare haplotypes with short mutation are connected to a central haplotype with high frequency [Reference Bandelt24]. We defined a subnetwork with 10 or more haplotypes with few mutations connected to one high-frequency central haplotype as one potential expansion. In total, we identified 88 potential demographic expansions of COVID-19 (Table S3 and Fig. 2a) by this approach. Temporal pattern of the expansion, which yielded from the earliest sampling time of central haplotypes, indicated that most expansions emerged since the end of February. Six expansions occurred before February, 18 in February, 61 in March and 2 since April. For the 18 ones in February, 16 of them took place after 20 February. Following the clade assignment, we identified 23 expansions in clade 19A, 13 ones in clade 19B, 25 ones in clade 20A, 10 ones in clade 20B and 17 ones in clade 20C (Tables S3 and S4). The expansion frequencies may change when different thresholds were used to define each expansion, but the total trend remains similar (Table S5). 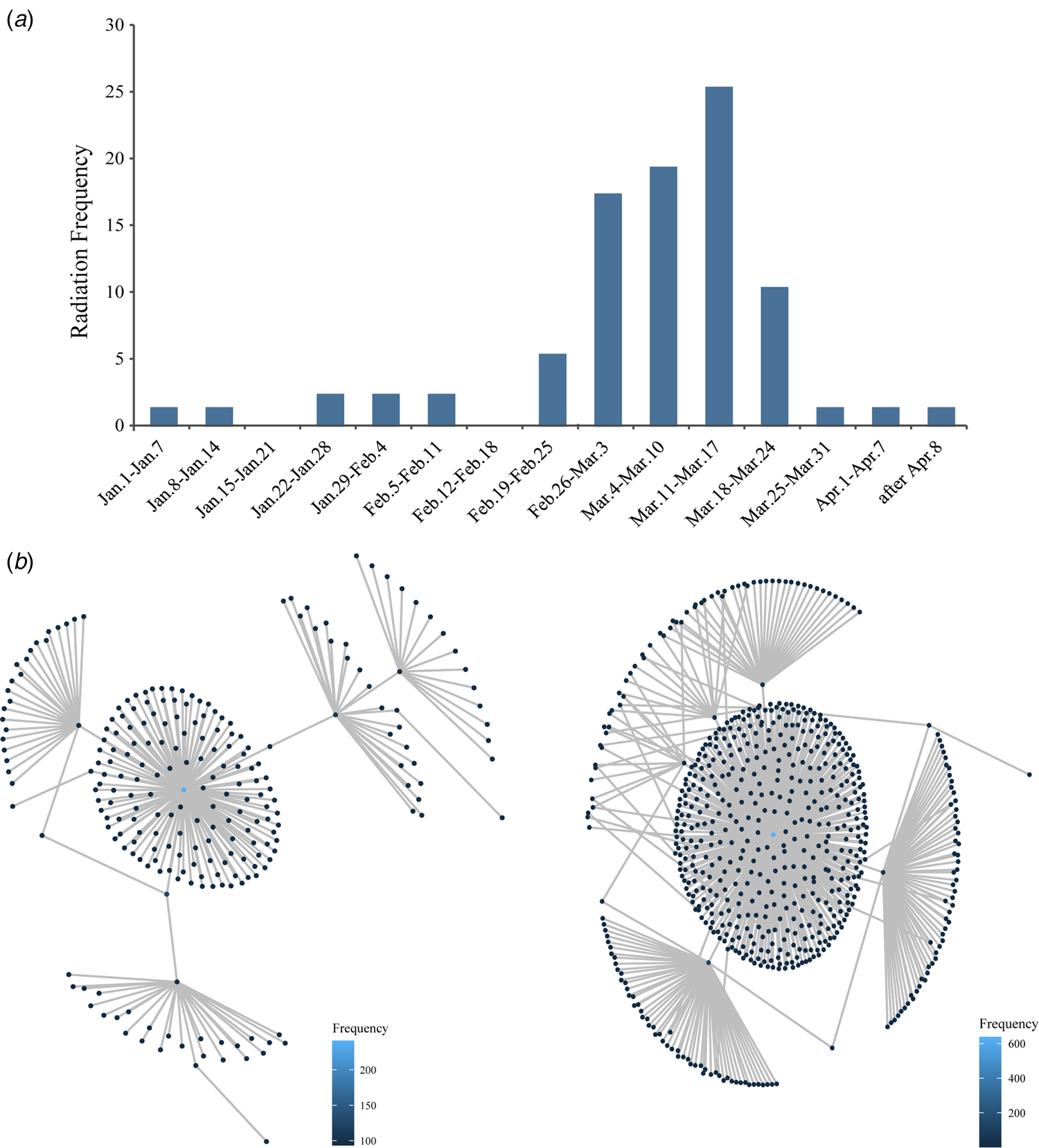 Fig. 2. (a) The demographic expansions against timescale. x-axis indicates time and y-axis shows the number of expansions. (b) Examples of the star-radiative structures in the median-joining subnetwork of the SARS-CoV-2 genomes. Colours stand for haplotype frequency.

This study further identified 88 potential demographic expansions of SARS-CoV-2. Most expansions were reported in Europe and North America. The temporal pattern indicated that multiple expansions occurred when quarantine policies to reduce social contacts had not been implemented [Reference Thunström28]. The local expansions occurred at a lower frequency as the intercontinental transmissions in January and February (Fig. 2a). However, since the end of February, the frequency of expansions drastically increased and peaked in March. After strong social distancing measures were strictly imposed [Reference Thunström28], the number of expansions quickly dropped (Fig. 2a and Table S3). Only two expansions were identified since April. Similar patterns were observed when applying different thresholds (Table S5). This is concordant with other studies [Reference Courtemanche13] and the trends of daily new cases (https://coronavirus.jhu.edu/map.html). For example, in Europe and North America, daily new cases peaked in mid-March or early April, then the curve reached a plateau or started to drop in most countries (https://coronavirus.jhu.edu/map.html).

Overall, the present study examined intercontinental transmission and local demographic expansion of the SARS-CoV-2 in the world based on a big dataset of the genomes. These findings inferred directly from the genome sequences are largely concordant with the epidemic reports and epidemic modelling [Reference Zhao and Chen11, Reference Hsiang12]. Our network analyses illustrated history and relationships of populations without any prior assumption on demographic histories. These results can be used as guidance in subsequent modelling and other studies. Both sample numbers and sampling bias may affect our estimations. For example, transmissions and expansions could not be estimated based on our methods when very few sequences are available. Dense samplings will identify more transmissions and expansion events. But our conclusions are not impacted by such bias, as the genome sequences were continuously increasing in April and May (Table S1). In this way, the decrease of frequency of international transmissions and number of expansions since April could not be an artefact because of fewer samples. Meanwhile, our results are concordant with other studies [Reference Rito27], which indicate the results are reliable. Despite these caveats, we provided the genomic evidence for quarantine validity on the spread of COVID-19 between continents across the world.

We owe thanks to the website of GISAID for gathering data in our study.

The data that support the findings of this study are available from GISAID (https://www.gisaid.org/). 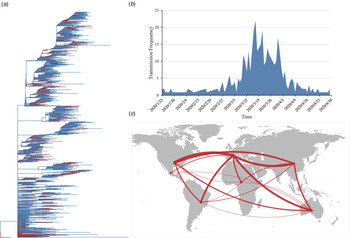 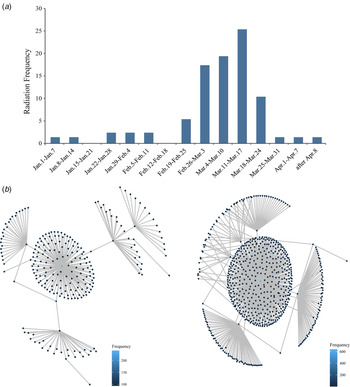 Fig. 2. (a) The demographic expansions against timescale. x-axis indicates time and y-axis shows the number of expansions. (b) Examples of the star-radiative structures in the median-joining subnetwork of the SARS-CoV-2 genomes. Colours stand for haplotype frequency.