Previous studies examining the risk factors for persistent colonisation have focused exclusively on hospitalised patients and used varying definitions of ‘persistence’ [Reference Robicsek, Beaumont and Peterson8, Reference Scanvic14]. Risk factors for persistent MRSA colonisation in the outpatient setting remain unstudied. Our group has demonstrated the factors associated with longer duration of colonisation with MRSA [Reference Cluzet9] and recurrent colonisation after clearance [Reference Cluzet15] using a longitudinal systematic surveillance approach in community-dwelling adults and children. The cohort of subjects in those studies revealed that approximately 20% of subjects never cleared colonisation while approximately 45% cleared colonisation without recurrence. Therefore, we sought to compare these groups to identify the factors associated with persistent colonisation. Identification of these factors will aid in better identifying this higher risk population and in devising interventions to decrease the burden of MRSA colonisation and subsequent infection.

We conducted a prospective cohort study between 1 January 2010 and 31 December 2012 at five adult and paediatric academic medical centres in Southeastern Pennsylvania. As described previously in [Reference Cluzet9], adults and children presenting to emergency departments and primary care settings with an acute MRSA SSTI were eligible for entry. MRSA SSTIs identified within 48 h of hospital admission were also considered eligible. To be enrolled, a study subject (i.e. index case) and all members of his/her household were required to agree to participate. All households agreeing to participate were included. Each index case and household was enrolled only once. Informed consent was obtained from all adult index cases and household members; subjects 7–17 years of age provided assent; parents provided consent for children younger than 7 years. This study was approved by the Institutional Review Boards of all participating institutions.

Index cases and household members performed self-sampling for MRSA from three anatomic sites (nares, axillae and groin) every 2 weeks for 6 months to assess for MRSA colonisation, for a total of 14 potential sampling periods. The rationale and protocol were described previously [Reference Cluzet9]. Briefly, subjects obtained specimens by placing one swab in both nares, then placing a second swab in both axillae followed by the groin. If the initial skin lesion was present, then that site was sampled with a third swab. The ESwab™ System (Copan Diagnostics Inc, Murrieta, CA) was used for sample collections. Subjects then mailed swabs to the study laboratory.

Demographic data, comorbidities, medications, number of people in the household and antibiotic use were collected via self-report at the initial home interview and updates requested at each sampling period. These data, along with data on the diagnosis and treatment of the presenting SSTI were confirmed or expanded with medical record review, including prescription records.

Bivariable analyses were performed to evaluate factors independently associated with persistent colonisation in the index case using Pearson's χ 2 or Fisher's exact test for categorical variables and student's t test for continuous variables. Multivariable logistic regression was used to determine the association between factors and persistent MRSA colonisation. Variables were included in the model if they were associated with persistent MRSA colonisation on bivariable analysis (P value ⩽0·20) [Reference Maldonado and Greenland18] and were maintained in the final model if they remained significantly associated with the outcome using manual backward deletion. An odds ratio (OR) and 95% confidence interval (CI) were calculated to evaluate the strength of associations.

Among the 243 index cases, 110 (45·3%) were determined to have clearance of MRSA colonisation without recurrence during the study period, while 48 (19·8%) met the definition of persistent colonisation. The median age of index cases was 19·5 years (interquartile range (IQR) 3·9–47·5) and 99 (62·7%) were female. Thirty-two (20·3%) index cases reported a history of prior MRSA infection; however, 46 (29·1%) index cases did not provide a response to this question. Subjects who reported prior MRSA infection were not more likely to have received a prescription for decolonisation agents (topical mupirocin or bleach baths/chlorhexidine) (P = 0·950). 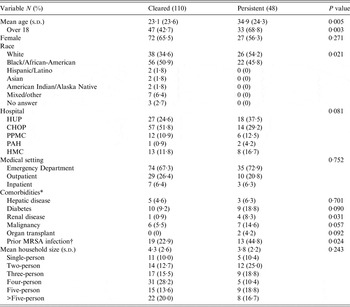 *Based on available data: 157 index cases. 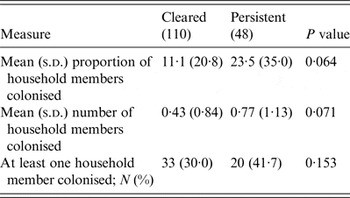 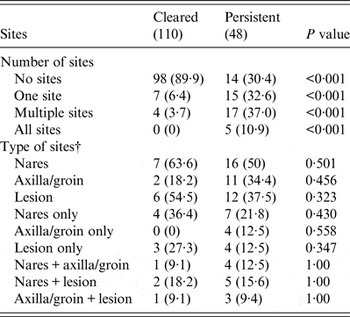 Table 4. Antibiotic and steroid use in study population 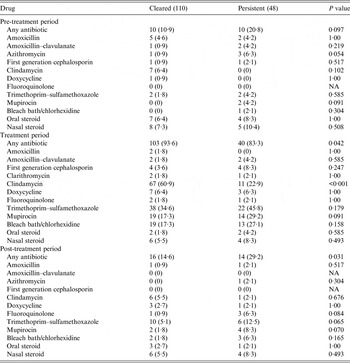 Owing to the decreased number of subjects reporting on prior MRSA infection and the importance of this variable, we performed a secondary analysis using only those subjects who provided an answer to that question. This cohort comprised 112 (70·9%) subjects. Of these, 29 (25·9%) of subjects met the definition of persistent colonisation and 83 (74·1%) of subjects had clearance of colonisation. The results of these analyses were identical to those of the primary analysis (data not shown).

In this longitudinal analysis of subjects presenting with MRSA SSTI and their household members, we found that 20% of index cases remained persistently colonised at the end of the study period. We identified several risk factors for persistent colonisation, including white race, prior MRSA infection and colonisation of multiple sites. We also found that treatment with clindamycin was associated with a decreased risk of persistent colonisation.

The site colonised plays a role in persistence. An increased number of colonised sites was associated with persistent colonisation in the present study as well as in a prior study evaluating the factors associated with persistent MRSA carriage in subjects who participated in a clinical trial of mupirocin for eradication of nasal carriage of MRSA [Reference Harbarth23]. The number of subjects with colonisation at each type of site was too small to be able to distinguish differences between site types in this study. However, it has previously been shown that colonisation of the rectum in addition to the nares is likely associated with persistence of MRSA colonisation [Reference Eveillard24]. Rectal swabs were deemed infeasible for self-collection in our study, but this association should be further explored. Identification of patients with multiple sites colonised will help target decolonisation efforts toward those at highest risk. Furthermore, more directed decolonisation (i.e. mupirocin or retapamulin) beyond anti-septic washes and dilute bleach baths at specific sites other than the nares may be useful and should be evaluated.

Treatment of the initial MRSA SSTI with clindamycin was significantly associated with decreased risk of persistent MRSA colonisation. We found the same association between clindamycin and earlier clearance of MRSA colonisation [Reference Cluzet9] as well as decreased risk of recurrent MRSA colonisation [Reference Cluzet15]. One small study noted that patients with staphylococcal skin infections treated with clindamycin for 3 months resulted in recurrent abscesses in 2 of 11 patients as compared with 7 of 11 patients who received placebo [Reference Klempner and Styrt29]. Clindamycin has been included as part of decolonisation protocols, with high success rates for eradication [Reference Tzermpos30, Reference Ammerlaan31]. Other agents with activity against MRSA, such as trimethoprim–sulfamethoxazole and doxycycline also have resulted in similar eradication rates [Reference Simor32]. However, these bundles included multiple components, including topical decolonisation agents, so the roles of specific components are not clear. Our study did not find an association between other MRSA-active antibiotics and persistent colonisation, but there may not have been sufficient power to study specific agents (e.g. doxycycline). Future studies are needed to confirm this effect of clindamycin and its potential use for decreasing the burden of MRSA colonisation and recurrent infections.

This study has several potential limitations. Recall bias is a concern because some data were obtained by self-report from the subjects. This most likely affected the ascertainment of prior antibiotic use and use of decolonisation methods, such as mupirocin or chlorhexidine. However, these data were confirmed using medical record review. Furthermore, potential interviewer bias was minimised by using a structured data abstraction form completed by study team members who were blinded to the subject's colonisation status. Index cases may have been misclassified in terms of clearance or persistence of colonisation. However, defining clearance of colonisation as all samples negative for two consecutive sampling periods decreased the possibility that we were missing true clearance of colonisation. As this is an observational study, there may be unmeasured confounders that could account for the findings of this study. Also, other household and community factors not assessed in this study, such as home surface contamination and pet carriage with MRSA, which have been shown to be associated with MRSA transmission within households [Reference Davis33]. In addition, rates and patterns of antibiotic resistance may vary across regions and this variation may result in differences in the distribution of risk factors. Nevertheless, this study was conducted at multiple sites comprising a geographically, racially and ethnically diverse population of both adults and children, which should improve the generalisability of these findings.

This work was supported by a Commonwealth Universal Research Enhancement Program grant from the Pennsylvania State Department of Health (EL). This work was also supported by the National Institutes of Health grant K24-AI 080942 (EL) and by the Centers for Disease Control and Prevention Epicenters Program grant U54-CK000163 (EL). The funding agencies had no role in the design and conduct of the study; collection, management, analysis and interpretation of the data; or preparation, review, or approval of the manuscript.

Table 4. Antibiotic and steroid use in study population