Lodgers in Rural and Urban Europe in the Past 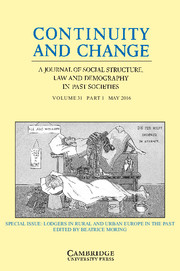