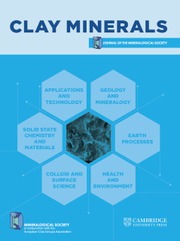 Geopolymers can be transformed into zeolites under certain synthesis conditions. However, zeolite formation is not frequently reported in KOH-activated geopolymers. This study attempted to explore zeolite synthesis through geopolymerization for a curing time of 24 h using mixed NaOH/KOH alkaline solution as an activator, and then applying the geopolymer-supported zeolites to immobilize Cd(II) in paddy soil. The K2O/M2O–H2O/SiO2 and K2O/M2O–OH–/SiO2 binary zeolite crystallization phase diagrams were obtained. Zeolite A, faujasite and sodalite formed at lower K2O/M2O molar ratios (0–0.2), ferrierite formation was favoured at a K2O/M2O molar ratio of 0.2–0.4 and zeolite K-I and zeolite F-K (both K-zeolites) were observed at a K2O/M2O molar ratio of 0.6. The geopolymer-supported zeolites had micropores and mesopores and specific surface area values of 44.2–74.8 m2 g–1. The material displayed a considerable Cd(II) immobilization efficiency (55.6–58.7% at 4–6 wt.% addition of zeolite).