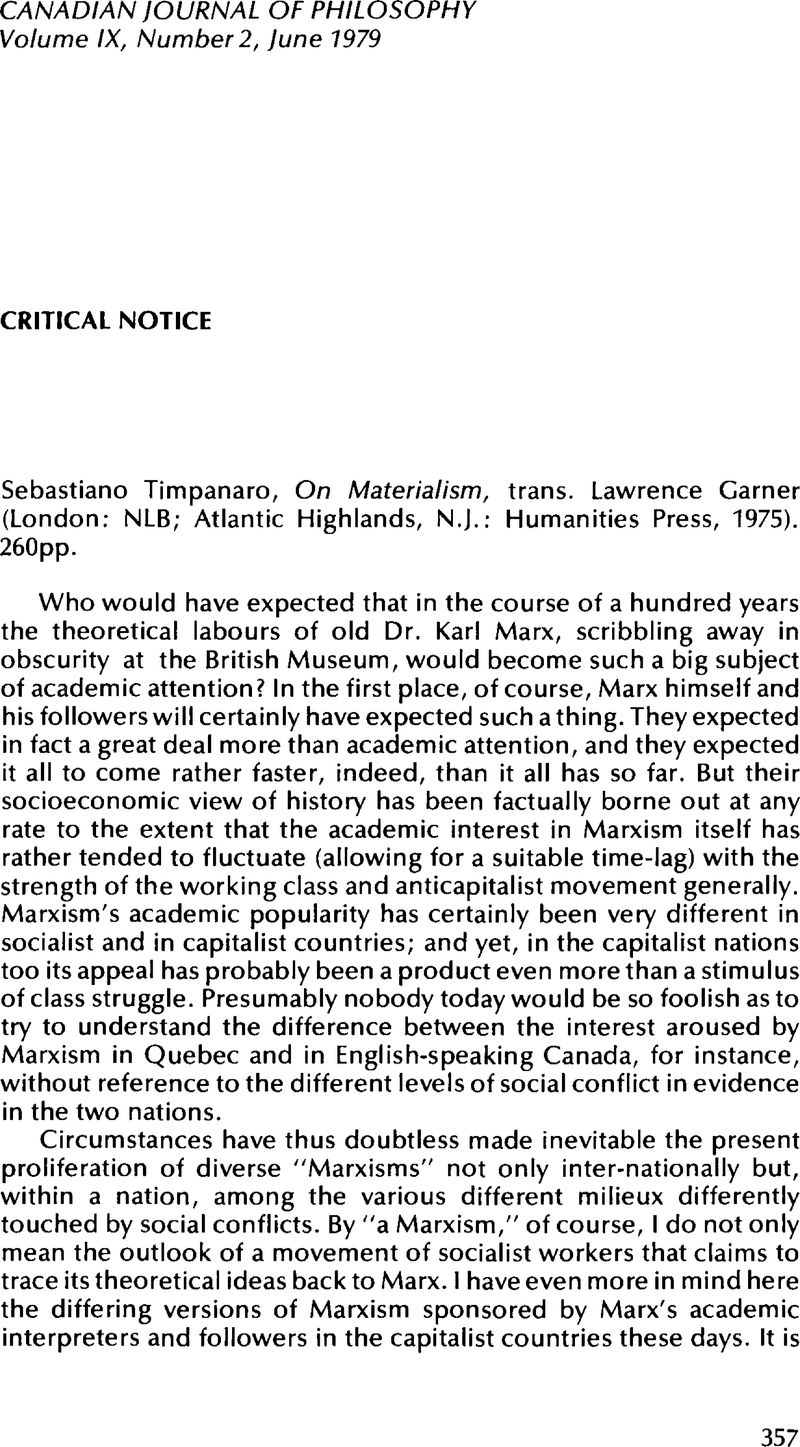 1 “Later historical practice cannot give the knowledge that Marx produced its status as knowledge: the criterion of the ‘truth’ of the knowledges produced by Marx's theoretical practice is provided by his theoretical practice itself, i.e., by the proof-value, by the scientific status of the forms which ensured the production of thost; knowledges.” (louis Althusser in Reading Capital, by Louis Althusser and Etienne Bali bar, translated by Ben Brewster, London, 1970, page 59.) “We showed that the validity of a scientific proposition as a knowledge was ensured in a determinate scientific practice by the action of particular forms which ensure the presence of scientificity in the production of knowledge, in other words, by specific forms that confer on a knowledge its character as a ('true’) knowledge.” (louis Althusser in ibid., page 67.)

2 Why so? Perhaps because accepting (acknowledging) the existence of some state of affairs was thereby accepting (acquiescing in) its existence? At any rate, it will be seen how materialists could be suspicious that such “activist epistemology” can actually be a substitute for activism in practice. For if the existence of an unpalatable reality can be done away with simply by refusing to accept it theoretically, why bother to leave the armchair?

3 In this connection, see my “Contribution towards the Development of the Causal Theory of Knowledge,” Australasian journal of Philosophy 50 1972.Google Scholar)

4 On pages 98-100, he quotes Engels in the Dialectics of Nature on the subsequent re-evolution of intelligent life elsewhere in the universe. On page 95, he had further quoted Engels in the Dialectics of Nature against any one-sidedly progressive view either of biological evolution or of human history. (However, on page 100 Timpanaro feels himself entitled to compare the “'eternal cycle’ of successive events of cosmic destruction and re-formation” with which Engels concludes his Introduction to the Dialectics of Nature, with “the Stoics’ concept of a periodic universal holocaust” as “a vision which it would be hard to term dialectical.” But he has himself just quoted Engels's forecast of the reappearance of intelligent life “more or less by chance … somewhere else and at another time“- crucial qualifications which surely altogether distinguish Engels's outlook from undialectical “eternal recurrence” theories. Indeed, surely only the thoroughgoing denial that any sort of thing either lasts forever or ceases to exist forever, is fully consonant with the dialectical insistence that nothing at all in the world will continue absolutely forever.)

5 Some have even sought in this spirit to read a non-materialist epistemology into Marx's first Thesis on Feuerbach, which criticizes “all hitherto existing materialism” for conceiving “the thing, reality, sensuousness … in the form of the object … but not as sensuous human activity, Praxis, not subjectively,” leaving “the active side” to be developed by idealism. In “Activism and Scientism in the Interpretation of Karl Marx's First and Third Theses on Feuerbach” (forthcoming in The Philosophical Forum 1978), Frank Cunningham and I argue that Marx's reference here in this particular Thesis is primarily to sociology, not to epistemology.

6 “When a man Reasoneth, hee does nothing else but conceive a sum me total!, from Addition of parcels; or conceive a Remainder, from Substraction of one sum me from another …. “ (Leviathan, chapter 5.)

8 In fact, it is on grounds like this that G.A. Cohen rather persuasively argues (Marx's, Karl Theory of History, A Defence, Oxford, 1978Google Scholar) that physical science should be classified not indeed with the social superstructure of society but with the forces of production underlying its economic base.