Development of LGI1 Antibody Encephalitis after Treatment of Lung Cancer

Recently, most patients with idiopathic encephalitis have been identified with autoimmune encephalitis associated with antibodies directed against the extracellular domains of cell surface proteins, which are critical in regulating neuronal excitability.Reference Irani and Vincent 1 - Reference Irani, Alexander and Waters 4 Such proteins include N-methyl- d -aspartate (NMDA), α-amino-3-hydroxy-5-methyl-4-isoxazolepropionic acid (AMPA), and γ-aminobutyric acid (GABA)-B receptors, as well as the voltage-gated K+ channel complex, consisting of leucine-rich, glioma-inactivated 1 (LGI1) and contactin-associated protein-like 2 (CASPR2).Reference Irani and Vincent 1

Despite this weak association with cancer, the presence of LGI1 antibodies and related clinical features are significant. These conditions presenting LGI1 antibody respond well to immunotherapy and sometimes are associated with hidden malignancy.Reference Lemieux, Provencher and Brunet 5

A 72-year-old man presented with cognitive impairment, followed by drug-resistant seizures. He had undergone successful treatment of lung cancer, exhibited normal behavior, and returned to work. His medical history included a diagnosis of lung cancer, verified by chest CT, which had revealed a well-defined solitary nodule in the right upper lobe (Figure 1A). 18F-fluorodeoxyglucose positron-emission tomography showed a hypermetabolic lesion in the right upper lobe, suggesting a primary lung cancer (Figure 1B). However, no metastasis or dissemination in other organs was evident. The patient therefore underwent lobectomy and wedge resection for lung cancer, and pathology had confirmed a non–small-cell lung cancer of stage IA (T1aN0M0) large-cell neuroendocrine carcinoma. After successful surgery, he was treated with cisplatin–vinorelbine combination chemotherapy without radiation, after which a chest CT detected no recurrence of lesions. However, after 3 months, his general activity level gradually declined and he showed neurological symptoms of language impairment and confusion, followed by tonic/dystonic seizures involving face and limbs. When he came to our department, detailed assessments of cognition, motor, and sensory function were not possible because of deteriorated mental status and sustained seizure indicating status epilepticus. Brain MRI using fluid-attenuated inversion recovery (FLAIR) and diffusion-weighted images (DWI) revealed high-signal lesions in the left parieto–temporo–occipital lobe including the insula, while apparent diffusion coefficient showed isointensity or hypointensity in the lesions (Figure 2). 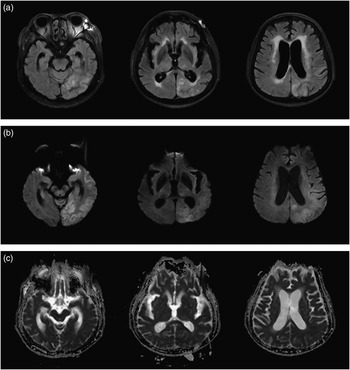 Conclusively, the test for antineuronal antibodies was positive for anti-LGI1 antibody in the serum, whereas tests for other antibodies, including anti-CASPR2, were negative. The patient started treatment with 1000 mg of methylprednisolone intravenous bolus for 5 days, followed by oral prednisolone (1 mg · kg–1 · day–1). After high-dose steroid treatment, status epilepticus was well controlled by antiepileptic drugs, and the patient’s mental and language functions gradually recovered; a follow-up MRI after high-dose steroid treatment also showed improvement.

We have described an unusual paraneoplastic case of postoperative LGI1 antibody encephalitis after surgical removal of and chemotherapy for lung cancer, with attention to clinical manifestations, autoimmune antibody involvement, and therapeutic effects.

Recently, researchers have identified several antibodies implicated in autoimmune encephalitis.Reference Irani and Vincent 1 - Reference Irani, Alexander and Waters 4 Among them, LGI1 antibody is well established as a factor against voltage-gated potassium channels.Reference Irani, Alexander and Waters 4 , Reference Lemieux, Provencher and Brunet 5 LGI1 is a glycoprotein-secreted neuronal protein from presynaptic terminals and binds to both presynaptic A disintegrin and metalloprotease (ADAM) 23 and postsynaptic ADAM22. Accordingly, LGI1 may regulate synaptic strength and transmission at excitatory synapses between presynaptic kv.1 channels and postsynaptic AMPA receptors.Reference Irani and Vincent 1 - Reference Lemieux, Provencher and Brunet 5 Therefore, autoantibody against LGI1 protein would disrupt synaptic transmission and consequently would be a pathogenic cause of autoimmune encephalitis.

The laboratory detection of antibodies and related clinical features in LGI1 antibody encephalitis can prompt early treatment and may lead to better outcomes.Reference Irani, Alexander and Waters 4 In our patient, we used an indirect immunofluorescence test to detect anti-LGI1 antibody. In brief, we reacted diluted patient serum (1:10) with HEK293 cells transfected with plasmids containing the human LGI1 sequence (Euroimmun AG, Lübeck, Germany), and we used fluorescein isothiocyanate–labeled anti-human immunoglobulin G as the secondary antibody. Even immunofluorescence over the cytoplasm indicated a positive reaction.

Therefore, from an etiologic perspective, our patient seems to have paraneoplastic autoimmune encephalitis targeting LGI1. Furthermore, the patient had been successfully treated for cancer with surgery, chemotherapy, and intermittent dexamethasone medication before LGI1 antibody encephalitis developed.

The operation or chemotherapy could have decompensated a precarious immunological homeostasis and aggravated preexisting, low-level LGI1 antibody encephalitis in our patient. In addition, he had not taken dexamethasone for 3 weeks when presenting with LGI1 antibody encephalitis. Accordingly, postoperative inflammation, chemotherapy, and withdrawal of dexamethasone might be associated with autoimmune cascade. However, we could not confirm the etiologic relevancy.

LGI1 antibody encephalitis can develop even after successful treatment of cancer. Testing for specific autoimmune antibodies can clarify the etiology of any undetermined encephalitis or neurological symptoms accompanied by seizure.

This research was supported by Basic Science Research Program through the National Research Foundation of Korea (NRF) funded by the Ministry of Science, ICT & Future Planning (2014R1A1A1005484), and grants from the Korea Health Care Technology R&D Project, Ministry for Health, Welfare & Family Affairs, Republic of Korea (A110834).

The authors report no disclosures or conflicts of interest.

Development of LGI1 Antibody Encephalitis after Treatment of Lung Cancer
×
×