At the exact time a thrombus blocks an intracranial artery, downstream blood flow drops. Depending on collateral extent, ischemic brain can have regions of flow ranging from very low to near normal. Regions with very low blood flow are likely to infarct earlier; nonetheless, these brain regions will remain viable for a short period. Computed tomography perfusion (CTP) thresholds predicting infarction on follow-up brain scans are therefore likely to depend on how fast reperfusion is achieved, and could break down if reperfusion is achieved ultra-early.

A 64-slice CT scanner (Lightspeed; GE Healthcare, Waukesha, WI) was used for all CT imaging. NCCT, head/neck multiphase CT angiography, and CTP were performed at admission. NCCT and multislice CTA were done per described protocol.Reference Menon, d’Esterre and Qazi 3 For the CTP protocol, 45 ml CT contrast agent (Optiray 320; Mallinckrodt Pharmaceuticals, Dublin, Ireland) was power injected at 4.5 ml/s followed by a saline chase of 40 ml at 6 ml/s. An 8-cm slab of the brain in 5-mm-thick slices was scanned using two phases: a 2.8-second interval for 60 seconds, then a 15-second interval for 90 seconds.

An expert radiologist (CK) delineated the follow-up infarct, when present, on diffusion-weighted imaging (n=5) or NCCT (n=2) superimposed onto coregistered CTP functional maps. Method for optimal threshold derivation has been described previously.Reference d’Esterre, Boesen and Ahn 2 Briefly, voxel-level histograms were extracted from the infarct (region of interest-infarct) and the ipsilateral hemisphere minus the infarct (region of interest-salvaged). Receiver operating characteristic curve was generated from the histograms. Youden’s method was then used to determine optimal threshold associated with follow-up infarction for each CTP parameter. Corresponding relative CBF thresholds were also calculated.

Seven patients satisfied inclusion criteria. Among these, three had onset to CTP ≤60 minutes (golden hour), whereas four had onset to CTP 60 to 180 minutes. Median (range) onset to CTP time was 148 minutes (52-180 minutes), CTP to final reperfusion time was 41 minutes (29-45 minutes), admission National Institutes of Health Stroke Scale was 11 (6-17) (Table 1). Optimal CTP thresholds, stratified by onset-to-CTP time, along with c-statistics and sensitivities/specificities, are shown in Table 2. Tmax >22 to 23 seconds and CBF <5.5 ml/min−1/(100 g)−1 or relative CBF <0.16 were optimal when reperfusion was achieved in patients resenting in the golden hour and achieving reperfusion within 45 minutes of baseline CTP. CTP thresholds for patients presenting within 3 hours of symptom onset but beyond the golden hour still achieving ultra-early reperfusion are slightly more liberal (Table 2).

* Significantly different from other parameters in that strata.

With better in-field triaging, efficient in-hospital workflow, and modern endovascular therapy, reperfusion times continue to get faster. Recently, we showed that a Tmax threshold of >16 seconds or absolute CBF threshold of <9 ml/min−1/(100 g)−1 (relative CBF <0.23) is associated with infarct if quality reperfusion is achieved within 90 minutes from CTP imaging.Reference d’Esterre, Boesen and Ahn 2 Herein, we show that CTP thresholds predicting follow-up infarction continue to evolve based on time to quality reperfusion. On average, Tmax >20 to 23 seconds and CBF <5 to 7 ml/min−1/(100 g)−1 or relative CBF <0.14 to 0.20 were optimal when reperfusion was achieved within 45 minutes of baseline CTP. These thresholds are lower than those for reperfusion within 90 minutesReference d’Esterre, Boesen and Ahn 2 and more stringent in the golden hour (Figure 1). Moreover, relative CBF thresholds from this analysis are much lower than current accepted thresholds.Reference Bivard, Levi and Krishnamurthy 4 - Reference Campbell, Christensen and Levi 6 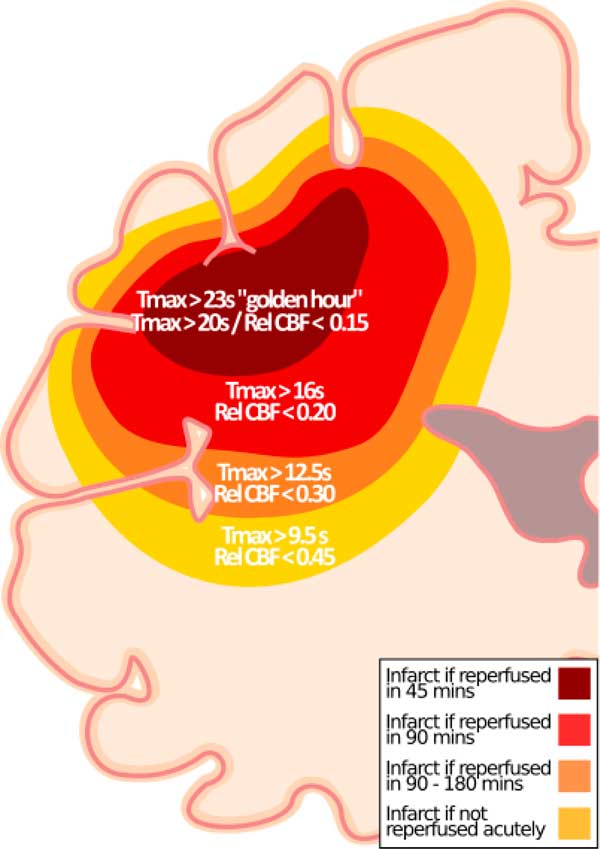 Figure 1 Updated hypothetical model for ischemic core prediction.Reference d’Esterre, Boesen and Ahn 2 In addition to previously published thresholds,Reference d’Esterre, Boesen and Ahn 2 thresholds for “golden hour” patients (Tmax >23 seconds) and for patients imaged between 60 and180 minutes after stroke onset (Tmax >20 seconds) who achieve reperfusion within 45 minutes of CTP are shown along with the corresponding relative CBF threshold.

Although recent studies, including ours, empirically report that CTP thresholds predictive of follow-up infarction do not vary substantively by onset to CT time,Reference d’Esterre, Boesen and Ahn 2 , Reference Qiao, Zhu and Patrie 7 but depend on imaging to reperfusion time, our results show that Tmax and CBF thresholds predicting follow-up infarction become stricter (higher for Tmax, lower for CBF) with early onset to imaging times. In our opinion, this could be because measurement onset time is more accurate the earlier a patient presents to hospital. We also note that the sensitivity and specificity of these thresholds in predicting infarct are slightly lower in the golden hour. Plausible explanation is that CTP measures blood flow rather than neuronal function and very early in the ischemic cascade the survival threshold is more heterogeneous if reperfusion can be established quickly. Interestingly, in the golden hour, the CBV parameter becomes as discriminative (c-statistic for gray matter and white matter of 0.81 and 0.80, respectively), if not more than the other parameters. If CBV is low (<2.6-2.7 ml/(100 g)−1), then that tissue has a very high likelihood of irreversible infarction, even if reperfusion occurs in <45 minutes. Conversely, if CBV is >2.7 ml/(100 g)−1and reperfusion occurs in <45 minutes, then that tissue has a high likelihood of surviving. The effect that ultra-early presentation and reperfusion has on the predictive characteristics of CTP thresholds are illustrated in the Supplemental Figure.

Ultra-early presentation and reperfusion is uncommon; we only identify seven such patients from a study of more than 500 patients. Nonetheless, the voxel-level analysis we performed gives our analysis some robustness. In summary, we show that with faster reperfusion time, CTP thresholds become more stringent. These stricter CTP thresholds may need to be considered when patients present very early to a community hospital and need to be triaged to an endovascular capable hospital. If the predicted infarct size using these thresholds is moderate to large, an argument could be made for futility of transfer. A larger sample will be needed however to better understand the biological underpinnings behind our work and to increase generalizability of these CTP thresholds.

This study is funded through an operating grant (PRoveIT) from the Canadian Institute of Health Research.

BKM, MDH, MG, AMD, and TYL have a patent pending on systems of triage in acute stroke. MDH, MG, AMD, TYL, and BKM hold stock in QuikFlo Health Inc. MG has a patent on systems of stroke diagnosis using multiphase computed tomographic angiography and a licensing agreement with GE Healthcare for the same. MDH and MG have a research grant with Covidien to conduct clinical trials. TYL licenses CT Perfusion software to GE Healthcare. The remaining authors have nothing to declare.