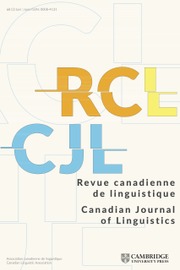 Notes from the Editors

In this, our 67th volume, we will be publishing three, rather than the customary four, issues. We will be publishing the same number of pages and cutting-edge articles as usual this year, but two thirds of these articles will be found in two thematic issues. 67.3 will be a thematic issue on Substance Free Phonology, and 67.4 will be a thematic issue on pronominal structure. As each of these thematic issues is the size of an issue and a half, we have decided to number this first issue 67.1–2; a double issue in name, while being single-issued in size. As is customary in many linguistic theories, we consider the second half of this double issue to be null.

I would like to thank all the people I have worked with over the last eight years here at the journal, as I will be finishing my mandate this coming June. I began as Book Review Editor in 2014, taking over for, and getting help from, Arsalan Kahnemuyipour. I passed this task on to Catherine Léger in 2016, when Éric Mathieu finished his mandate as Editor, and Elizabeth Cowper took his place after her time as Co-editor, a role into which I gladly stepped. Then, in 2019, I moved into the Editor role, and we brought on Dan Siddiqi as Co-editor. Both Elizabeth and Dan have been amazing editorial team-mates, and I am so grateful to have had their support and friendship throughout my time at the journal as we worked to augment both its size and international scope – aims that we have successfully achieved. During this time, I have had two amazing Editorial Assistants, first Andréia De Souza, and then Máire Noonan, the latter who also took on the role of Book Review Editor for the last couple of years. I have also had the incomparable pleasure of working with Yannick Morin, our exacting and ever-dependable copy editor. I would also like to thank Julie Auger, Daniel Hall, and Lydia White, who have been an incredible support in their roles as Associate Editors, as well as all the members of our Editorial Board, the Executive Committee of the CLA/ACL, and the editorial team at CUP for all of the time they have taken to help the journal continue on its trajectory.

Editing the CJL/RCL has been one of the highlights of my early career, and I know I am leaving it in good hands. I encourage you to stay tuned for the upcoming evolution of the journal's editorial team.

My time with CJL has been relatively brief, but so eventful! I served as the Co-editor for the entirety of what I think history will look back on as the core two years of the Covid-19 pandemic. Serving in this role during this time allowed me a glimpse into the many different ways the pandemic affected linguists all over the world. As my mandate as Co-editor comes to an end, I find I appreciate my new perspective. I am grateful to every contributor and every reviewer who has participated in CJL in the last two years. I especially want to thank Heather Newell, who has been the best possible partner during these past tumultuous years. I am grateful for her support and, more important, dear friendship for the duration of my mandate. I would also like to follow Heather in thanking Elizabeth Cowper, Andréia De Souza, Máire Noonan, Julie Auger, Daniel Hall, Lydia White, and Yannick Morin – all of whom were invaluable in supporting me. I also want to extend my gratitude to the members of the Editorial Board, which I called upon frequently. I second Heather in knowing we leave the journal in good hands and in encouraging you to stay tuned for more from the journal's new team!

Notes from the Editors
×

Notes from the Editors
×

Notes from the Editors
×
×