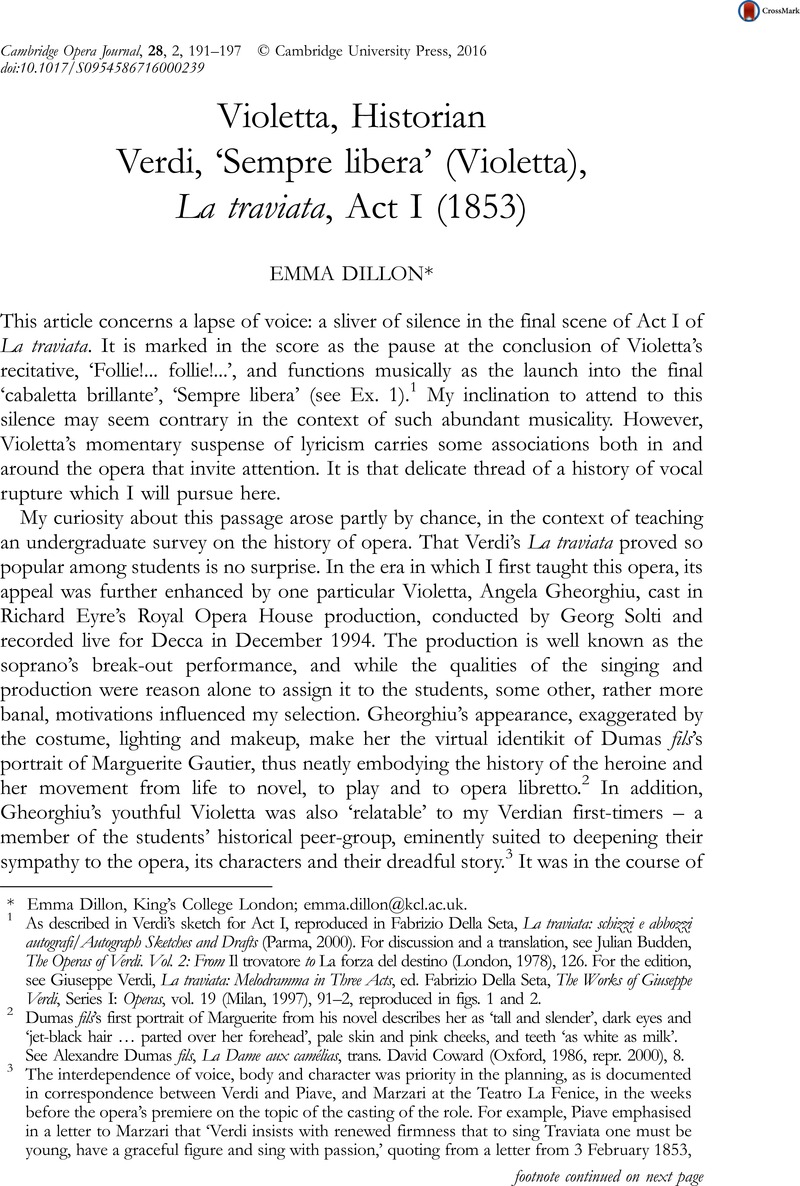 3 The interdependence of voice, body and character was priority in the planning, as is documented in correspondence between Verdi and Piave, and Marzari at the Teatro La Fenice, in the weeks before the opera’s premiere on the topic of the casting of the role. For example, Piave emphasised in a letter to Marzari that ‘Verdi insists with renewed firmness that to sing Traviata one must be young, have a graceful figure and sing with passion,’ quoting from a letter from 3 February 1853, from Piave at S. Agata to Marzari. Translation from Budden, Operas of Verdi, 122; see Conati, Marcello, La bottega della musica: Verdi e La Fenice (Milan, 1983)Google Scholar, letter 264, 314–15.

5 Edita Gruberova (1992), for example, moves into a series of twirls before reaching for a glass of wine.

6 Lucrezia Bori (1928) quickens up through the final turn, and moves straight to laughter. Maria Callas (1953) shifts to a quiet chuckle. Joan Sutherland’s staged performances conclude with a high peal of laughter, while Gruberova’s twirls (1992) are accompanied by laughter. Perhaps the most dramatic interjection of laughter is in Lina Pagliughi’s performance from 1951, in which the soprano sings a connecting note, swooping up to link the final note of the recitative to the first utterance of laughter.

7 Anna Netrebko (2005) sets up her champagne glass through the cadenza and fills the silence with giggles and swigs. Mirella Freni (1973) also has a glass in hand.

9 The link between love as inspiration for song, and vice versa, is the standard topic of early vernacular lyric.

15 Della Seta, Schizzi e abbozzi autografi. The Andante is included in Verdi’s outline of Act I in the opening fascicle of the sketches (see above, note 1), and appears in two other places: as a sketch with accompaniment (but without words) in fascicle XV, 2 and as a complete draft of the final melody (with words), in fascicle VIII, 4. Both versions are transcribed by Della Seta, 128–9. For detailed discussion of Verdi’s process, and the relationship between sketch, draft, short scores and orchestrated final versions, see esp. Della Seta, 35–41. A third unidentified melody appears in III, 5 (transcribed by Della Seta at 203), with a similar opening three-note falling motif, punctuated by rests. While the remainder of that melody has little in common with the other two examples, the example offers another impression of how this ‘interrupted’ motif may have been circulated in the period of the opera’s creation.

16 Seta, Schizzi e abbozzi autografi, 67–9, observes that note values and rests are among the details the composer left out, noting such absences reflect the ‘shorthand and strictly private character of the sketches. In general one can say that … the gaps in the writing exist only on paper and that the composer filled them out in his mind’. By contrast to the more partial nature of Verdi’s notation elsewhere, the rests in the opening of ‘Ah, fors’è lui’ consistently made it onto the page.