Slipping Out Handel, ‘As with rosy steps the morn’ (Irene), Theodora, Act I 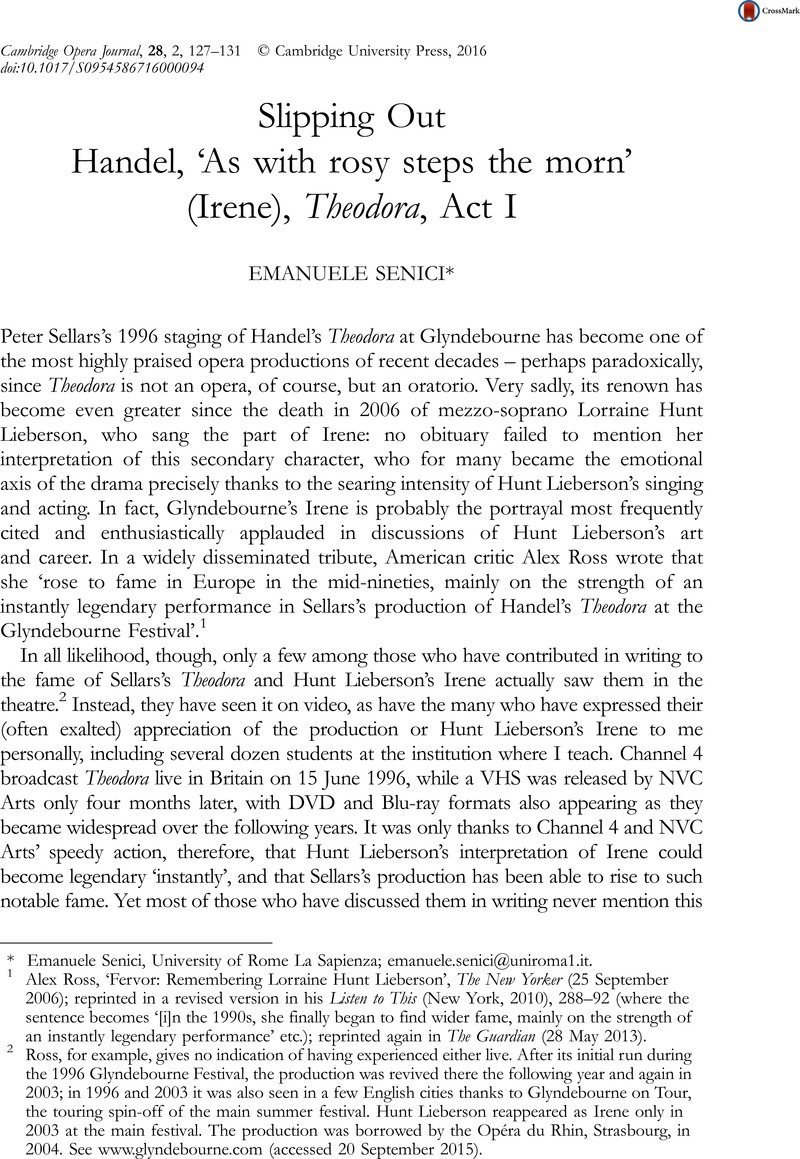 1 Ross, Alex, ‘Fervor: Remembering Lorraine Hunt Lieberson’, The New Yorker (25 September 2006)Google Scholar; reprinted in a revised version in his Listen to This (New York, 2010), 288–92 (where the sentence becomes ‘[i]n the 1990s, she finally began to find wider fame, mainly on the strength of an instantly legendary performance’ etc.); reprinted again in The Guardian (28 May 2013).

2 Ross, for example, gives no indication of having experienced either live. After its initial run during the 1996 Glyndebourne Festival, the production was revived there the following year and again in 2003; in 1996 and 2003 it was also seen in a few English cities thanks to Glyndebourne on Tour, the touring spin-off of the main summer festival. Hunt Lieberson reappeared as Irene only in 2003 at the main festival. The production was borrowed by the Opéra du Rhin, Strasbourg, in 2004. See www.glyndebourne.com (accessed 20 September 2015).

3 Ross is among the few who makes a nod to the video, but, strangely enough, in the context of a discussion of Hunt Lieberson’s voice alone, with no mention of her acting: see Ross, ‘Fervor’, 290. Sellars’s production is not discussed in Peter Sellars, ed. Maria Delgado and Valentina Valentini (Soveria Mannelli, 1999), but it features rather prominently in Peter Sellars, ed. Frédéric Maurin (Paris, 2003), where, however, its video is never mentioned (it is missing even from the videography on pp. 430–1): see in particular Moindrot, Isabelle, ‘Ténèbres et lumières: Peter Sellars, metteur en scène de Haendel et de Mozart’, 22–61 Google Scholar. I have not been able to consult Extrakte: Peter Sellars, amerikanisches Welttheater, ed. Gottfried Meyer-Thoss (Berlin, 2003). All that a recent text on the production has to say about the video is, tellingly: ‘The emotion of this by-now mythical production continues to show through [transparaître] the video that was providentially made of it’; Alain Perroux, ‘Theodora Handel’, in the special issue devoted to Peter Sellars of L’Avant-Scène Opèra 287 (July–August 2015), 69.

4 I take the text from the libretto published by Smith, Ruth as an appendix to her ‘Comprehending Theodora ’, Eighteenth-Century Music 2 (2005), 57–90 CrossRefGoogle Scholar; here 85.

5 Winton Dean calls this section nothing less than ‘disastrous’, declaring that it ‘seems to have been added merely to use up the words with which Morell underlines his superfluous moral’; Handel’s Dramatic Oratorios and Masques (London, 1959), 565, quoted in Smith, ‘Comprehending Theodora’, 77–8.

6 The second cadenza goes all the way down to a G exactly two octaves lower than the high one at the end of the B section. Hunt Lieberson does not otherwise vary the vocal line in the da capo.

7 Among the handful of texts directly addressing the relationship between an operatic staging and its video, I would like to mention in particular Roger Parker’s ‘Giuseppe Verdi’s Don Carlo(s): “Live” on DVD’, Opera Quarterly 26 (2010), 603–14, which, under the humble guise of a review of two DVDs, contains a particularly insightful discussion of the subtle yet powerful ways in which videos can alter our perception of theatrical mise-en-scènes.

8 I am grateful to Roger Parker for drawing my attention to this moment several years ago.

Slipping Out Handel, ‘As with rosy steps the morn’ (Irene), Theodora, Act I
×

Slipping Out Handel, ‘As with rosy steps the morn’ (Irene), Theodora, Act I
×

Slipping Out Handel, ‘As with rosy steps the morn’ (Irene), Theodora, Act I
×
×