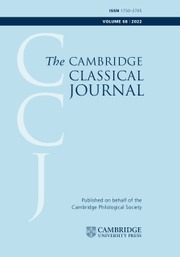 Music and mathematics: Theophrastus against the number-theorists

A long and important fragment of the Περὶ μοψσικῆς of Theophrastus is preserved in Porphyry's commentary on Ptolemy's Harmonics. Both Porphyry and Ptolemy were reedited earlier in this century by Düring, in works which have rightly been taken to supersede the texts of Wallis: and so far as the Theophrastus passage is concerned, we should expect to be able to abandon in Düring's favour the text published by Wimmer, who in effect reprints Wallis, though adopting a few variant readings and emendations from Schneider. But it seems to me that Düring's text is not in all respects an improvement, and that the comments made on it in a subsequent publication by Alexanderson have muddied the waters still further. It is not only a matter of the text: Alexanderson prints also a (partial) translation and an interpretative commentary, and both are open to serious objections. I intend in this paper to deal only with a portion of the fragment, but it is that portion whose argument is the most intricate, and one which ought to shed a good deal of light on central controversies among the musical theoreticians who follow Aristotle. I am not in a position to dispute any of Düring's findings in the manuscripts, but where emendation has in any event proved necessary or where the manuscripts differ among themselves, I hope to show through a study of the content of the argument that the case in favour of Düring is not always closed.

7. The most complete example which remains of a work designed on the basis of the theory here attacked is of course the Euclidean Sectio Canonis. Ptolemy and Porphyry both refer us to the earlier work of Archytas. It appears from their remarks that whereas his predecessors among the Pythagoreans had restricted themselves to the discovery of ratios involved in concords, Archytas sought

8. In Aristoxenus the term

may sometimes be construed as referring to other musical theorists quite generally (perhaps El. Harm. 2, 5): but more commonly it is used, as by Theophrastus here, to pick out a particular school. Their reliance on

is implied (e.g. 40) though not emphasised by Aristoxenus – he is after all more concerned to attack those who rely on things other than

. His criticisms of them seem to turn largely on their ignorance of, and failure to seek, any principles governing the nature of

: they are ‘mere’ empiricists, seeking to distinguish intervals accurately, to develop an accurate notation to represent them, and to tabulate their sequences in the simplest schematic ways – ways which, according to Aristoxenus, wholly ignore their specifically musical interrelations. They are presumably close relatives of the

of Republic 531 a-b, where the description of them as

may be seen as providing a link with the procedure of

which Aristoxenus characteristically associates with the

9. It has been pointed out to me that in fr. 1, lines 37ff and 76 (Wimmer), Theophrastus seems to use the two words interchangeably. This obviously weakens my case, but I do not think that it destroys it.

10. The notion of a ‘shade’ may require a little explanation. Within the scale, as understood by writers of this period, certain notes are ‘fixed’ – i.e. stand always at the same intervals from one another. Others are not, and by moving these up or down a small amount we can shift the scale from one

to another, the three

being diatonic, chromatic, enharmonic. (Besides the passages from Aristoxenus cited below, see e.g. D.K. 47 A16 on Archytas.) But even then these moveable notes are not completely determined. By moving them up or down within a very small range (

) we can generate subtly different effects; and while these changes are not reckoned to constitute shifts of

, they are sufficient to be recognised, and are designated as differences of shade,

No doubt these distinctions originated in the preferences of performances for particular styles of tuning (cf. El. Harm. 23), but however haphazard their origins, Aristoxenus is able to present a formal account of them, recognising three shades of the chromatic and two of the diatonic. The enharmonic does not, in his scheme, admit of such variations. See especially El. Harm. 47–52.

12. It has been suggested to me that the

is a genuine connective. This would mean that the protasis which begins at

line 14), and then subdivides into the

of line 21.1 find the suggestion quite attractive: it would affect the sense only marginally.

Music and mathematics: Theophrastus against the number-theorists
×

Music and mathematics: Theophrastus against the number-theorists
×

Music and mathematics: Theophrastus against the number-theorists
×
×