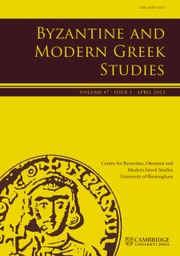 The three strange poems in English which constitute the section ‘Foreign Language Verse’ in Cavafy’s Unpublished Poems present problems of authorship, interpretation and preservation. Who wrote them? What are they about? Why did Cavafy, who destroyed so much, trouble to keep them? The purpose of the present note is to provide plausible, if not definitive, answers to these three questions. The poems under discussion are, ‘Leaving Therápia’, ‘Darkness and Shadows’ and the untitled poem that begins, ‘More happy thou, performing Member’.

3. Savidis points out that Therapia should be stressed on either the final or the penultimate syllable (

194). Cavafy’s unconventional use of a stress mark on the English form of the word implies a deliberate departure from the ‘correct’ stress, and is presumably metrical license. It is an index of his familiarity with the sound-patterns of English.

5. The text of ‘Constantinopoliad, an Epic’ has been published by Savidi, Lena in

6. Revisions include improvements to the English. The word ‘lithlessly’, for example, reproduced without comment from the manuscript version in both

and presumably a slip of the pen for ‘listlessly’, has been omitted (1.2).

7. Bibliographical details of all John Cavafy’s publications can be found in Karayannis, V.,

(Athens 1983), 146–148 Google Scholar. A surviving copy of John Cavafy’s book is available for inspection at the Benaki Museum’s historical archives.

9. Although the title may well have been inspired by Victor Hugo’s 1840 collection, Les Rayons et les ombres, as Savidis has suggested (

195), I am unable to agree that the opening poem of that collection, ‘Fonction d’un poète’, is connected to the poem under discussion.Hugo’s concern is with the poet’s role, whereas ‘Darkness and Shadow’ is about man’s relationship with God and does not mention poets. Also, Hugo’s poem is considerably longer than John Cavafy’s, divided into 25 10-line verses and 14 4-line verses, and rhymed ABAB throughout. In terms of versification, an English blank-verse model clearly lies behind ‘Darkness and Shadows’.

29), mistaking one for the other. As a result, the child’s face, enlarged from this photograph and used as the frontispiece of

is not Constantine’s but John’s.

16. ‘Constantinopoliad, an Epic’, 47, see Our Mutual Friend, 236 (Thank’ee, Wegg, both for your confidence in me and for your frequent dropping into poetry’); see also note 32 below. Dickens’s biting satire has evidently inspired the characterisations in both of Cavafy’s texts. The phrase ‘as who shall say’, followed by a direct quotation (‘Constantinopoliad’, 45), is clearly adapted from Dickens’s repeated, ‘as one who says’, always followed by a quotation. (See, for example, Our Mutual Friend 49 and 51. References are to the 1985 reprint of the Penguin edition of 1971. The novel itself first appeared in book-form in 1865).

17. Savidis suggests that the authorship is in doubt:

28. Lena Savidis, op. cit., 307: Cavafy travelled to Athens to be with Alexander during his last illness, and kept a diary relating to it. The death notice reproduced on this page is probably Cavafy’s work.

30. A ‘charming piece of poetry’ recited by Silas Wegg to his employer begins, ‘The gay, the gay and festive scene/The halls, the halls of dazzling light’ (Our Mutual Friend, 230).

31. In the English language ‘Memorandum about the Cavafy Family’ which has never been published in full. The excerpt above-quoted appears in Lena Savidi, op. cit. 75, in Greek translation. The most probable reason for the non-publication of this extremely important document is difficulty of decipherment. On this subject, see Karayannis, op. cit., 10–11.

32. Here Cavafy names his ‘rival’, Silas Wegg. It is noteworthy that this gentleman was employed to read aloud from The Decline and Fall of the Roman Empire (see Our Mutual Friend, 96 and 103–4). Dickens describes Wegg as ‘an observant person’ (89). His contract to read aloud to Mr. Boffin (whose education has been ‘neglected’, 93) is a business arrangement, but he agrees, as a friend, to ‘drop into poetry’ from time to time (95). Cavafy’s youthful, humorous identification of himself with the unlovely Mr. Wegg, made while sailing to Constantinople, implies an interest in Gibbon, at this early stage, as well as poetic tendencies.

33. I am assuming that Savidis is correct in identifying the handwriting as ‘more mature’. The signature, in that case, would indicate that Cavafy, in the course of one of his ‘purges’, had decided to preserve this particular text, ‘as autobiographical’. Compare the poet’s note to

a poem from the same place and period (Constantinople, 1885) in Savidis,

35. The text is given in full by Tsirkas, op. cit., 194–5. We can well imagine the grief-stricken Cavafy coming upon his early family skit, ‘More happy thou…’ after the obsequies, and signing it in honour, as it were, of his dead brother.

194), but the close association of this text with ‘Constantinopoliad, an Epic’, in terms of shared allusions to the six Cavafy brothers who went to Constantinople and to Our Mutual Friend suggests a date closer to 1882. Peter’s appointment to the Sanitary Council might indicate a terminus post quem of 1881; his return to Alexandria with John and Alexander marks the terminus ante quem: August 1882.

39. Cavafy is said by Perides to have been greatly influenced by Hugo at an early stage, but this is not entirely borne out by the same author’s observation that the copies of collections of Hugo’s verse in Cavafy’s possession had a great many uncut pages, typically from the middle of a book onwards. Perides, M.,

40. In the frontispiece dedication to Early Verse.