Type of dietary fat intakes in relation to all-cause and cause-specific mortality in US adults: an iso-energetic substitution analysis from the American National Health and Nutrition Examination Survey linked to the US mortality registry

CVD and cancer represent major causes of mortality in high-income countries( Reference Lozano, Naghavi and Foreman 1 ). In the USA, it was estimated that CVD and cancer combined account for more than 50 % of the overall mortality burden among adults and represent the first and second cause of mortality, respectively( Reference Kenneth, Kochanek and Jiaquan 2 ). It is widely acknowledged that, among others, unhealthy diet and poor lifestyle represent major preventable risk factors for all-cause and cardiovascular mortality in the USA, with unhealthy diet and intake of specific dietary fat in particular, representing a considerable part of the risk( Reference Danaei, Ding and Mozaffarian 3 ). Notably, in 2010 it was estimated that saturated and trans-unsaturated fat consumption was higher in the USA (11·8 and 2·8 % of the overall energy intake, respectively) when compared with global consumption (9·4 and 1·4 % of the overall energy intake, respectively). On the other hand, consumption of poly-unsaturated fat consumption was comparable between the USA and all of the other countries combined, representing about 5·9 % of the overall energy intake( Reference Micha, Khatibzadeh and Shi 4 ).

The aim of the present study was to estimate the association between an increase in mono- and polyunsaturated fat intake or the substitution of saturated fat to mono- and poly-unsaturated fat and mortality reduction in US adults. For this purpose, an energy partition model and an iso-energetic substitution analysis were conducted over a prospective study resulting from the American National Health and Nutrition Examination Survey (NHANES) linked to the US national death registry.

The NHANES is an epidemiological cross-sectional study aimed to generate a representative sample of the civilian non-institutionalised US adults using a multi-stage probability sampling design( 14 ). The NHANES study started in 1999 and every year about 5000 US citizens are involved providing data regarding their socio-economical characteristics, dietary habits, medical status and medical history. On a regular basis, the NHANES participants are linked to the US death registry using a probabilistic record linkage defining a prospective mortality study. The last linkage to the US mortality registry was in 2011( 15 ).

The number of all participants from the survey conducted between 1999 and 2011 was 62 210, of whom 21 290 were excluded because of no available data on mortality or age under 18 years, leaving 40 870 participants. After exclusion of subjects aged between 18 and 30 years, 30 509 subjects were retained. Exclusion of prevalent cases of cancer, diabetes and CVD reduced the sample to 21 344 participants. Finally, the exclusion of subjects with missing information on fat intake and adjusting covariates used in the models led to a final sample size of 18 372 individuals, resulting in a cumulative observational time of 116 398 person-years with a median observational time of 6·1 years. During the follow-up, 1118 deaths for all causes, 267 deaths for cardiovascular cause and 289 deaths due to cancer were observed. The flow chart of participant selection was reported on Fig. 1. 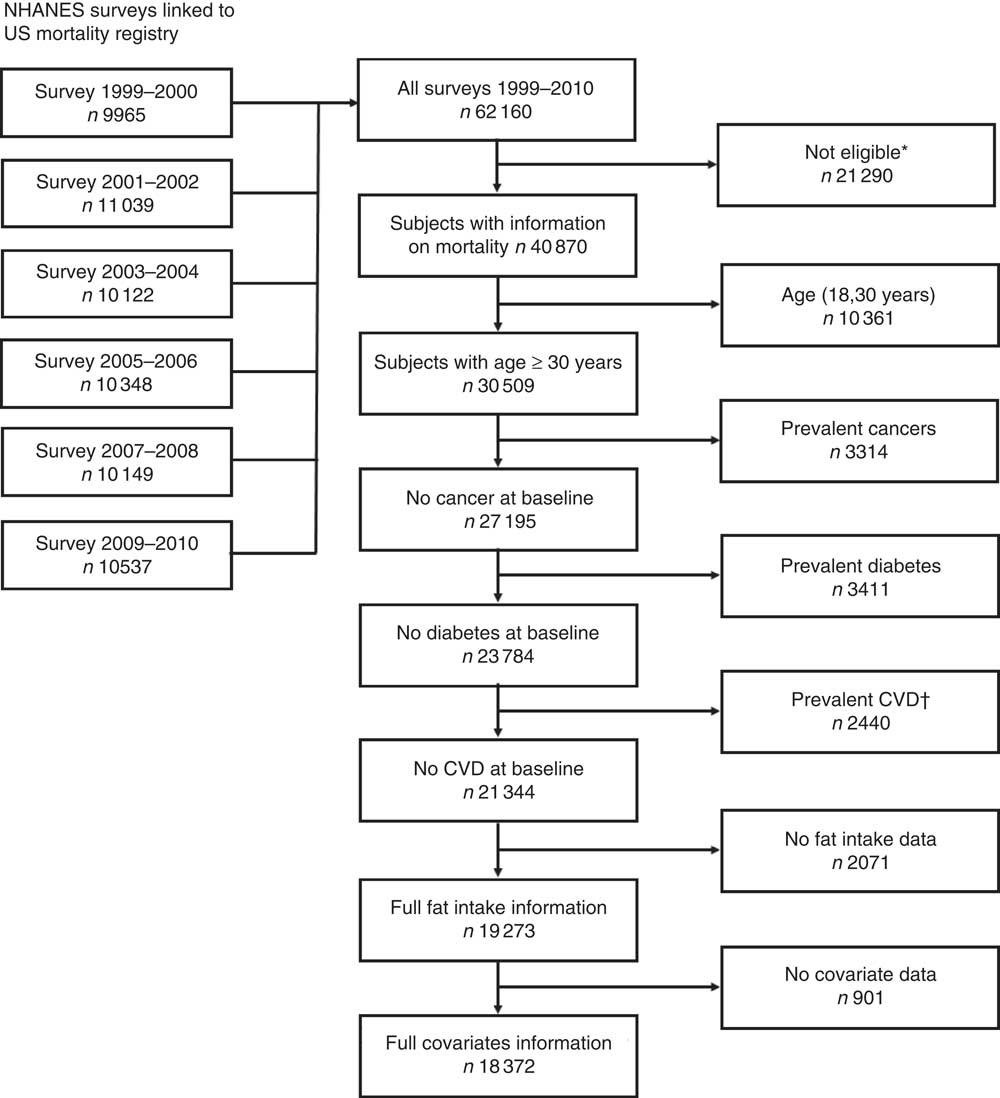 Fig. 1 Flow chart of participants selected from National Health and Nutrition Examination Survey (NHANES) surveys conducted between 1999 and 2010. * Subjects without mortality data or aged under 18 years old. † Subjects having at least one of the following: congestive heart failure, CHD, angina pectoris, heart attack and stroke.

A dietary interview assessing detailed dietary intake information was performed to estimate types and amounts of foods and beverages consumed and to calculate total energy intake. The dietary interview was composed of three sections – 24-h dietary recall, evaluation of nutritional supplements and dietary post recall – and was administered to all NHANES participants. To allow for better estimates of usual nutrient intakes, 2 d of dietary data were collected for the survey performed after 2002. The dietary post recall was conducted by telephone interview after approximately 3–10 d from the first dietary evaluation( 16 ).

All analyses were based on multivariable adjusted Cox proportional hazard model having age as an underlying time variable and stratified by sex and 5-year age classes. Raw and multivariable adjusted models considering potential confounders were evaluated in a sequential modelling approach aimed to evaluate the residual confounding bias (results not shown). After the evaluation of the results from sequential modelling, a multivariate model adjusted for ethnicity (Black, White and others), BMI (continuous), alcohol intake (continuous), smoking status (more than 100 cigarettes/life), education (university degree), sedentariness (subjects who declared having more than 8 h/d of sedentary activity or who do not declared moderate or vigorous physical activity), dietary fibre intake (continuous) and blood pressure (systolic and diastolic blood pressure as continuous data) was chosen to report all of the results. The proportional hazard assumption was evaluated by Schoenfeld’s residuals. Sensitivity analyses were conducted excluding death cases assessed in the first 18 months after recruitment. Results from the analyses evaluating the association between tertiles of energy density of saturated, monounsaturated and polyunsaturated fat with all-cause and specific-cause mortality were reported along with trend tests performed considering 1 sd increase (Table 2). The associations between changes of fat intake and all-cause and specific-cause mortality were performed considering the energy partition and nutrient density paradigms as previously described by Hu et al.( Reference Hu, Stampfer and Rimm 17 ). In brief, in the energy partition model, the total energy from the nutrients is partitioned in the different components contributing to the energy intake, so that nutrients are coded in a metric of their energy contribution. In this model, the relative risk estimate corresponds to a given increase of energy from that specific component when all of the other components remain constant. The analyses based on the energy partition models were performed considering all of the dietary components (carbohydrates, proteins and fat) and the fat components only. On the other hand, the nutrient density model is a substitution model in which the ratio between the energy from the single dietary component and the overall energy from all dietary components are considered in the model so that the sum of all the components remains constant and corresponds to a given numerical value (100 % if the percentage is used). This model is performed considering the energy from fat components contributing to energy intake excluding one, so that the relative risk estimate for a given component represents the substitution of a given quantity (1 % when the percentage is used) of the excluded component with this one. In the present work, the substitution model was performed considering a 10 % substitution of the energy from fat consumption only. The reported risk then was related to 10 % substitution of fat only derived energy, excluding carbohydrates and proteins. Energy partition and substitution analysis were reported in Table 3.

All statistical analyses were performed taking into account the multi-stage probability sampling design of the NHANES study using the weights from the multi-stage probability sampling to avoid the effect of differential probabilities of selection among subgroups, and to compensate for exclusion of sampling areas in the sampling frame. The surveymean and the surveyfreq procedures of the SAS software were used to describe the sample, whereas the Cox models were fitted using the proc surveyphreg of the SAS software. Statistical analyses were performed using SAS package version 9.4 and type-I error (α) was set to 0·05 (5 %).

Partition models reported about the associations between a given increase in fat intake and mortality risk when maintaining constant the other sources of energy. According to these analyses, it was observed that an increase of 418·4 kJ/d (100 kcal/d) in any of the fats did not correspond to a significant change of the mortality risk when energy intake from other fats, carbohydrates and proteins remained constant. On the contrary, when the analysis is performed maintaining constant the energy from fat sources only, a 418·4 kJ/d (100 kcal/d) increase in saturated fat intake resulted in a 9 % significantly increased risk for all-cause, cardiovascular and cancer mortality. On the other hand, a 418·4 kJ/d (100 kcal/d) increase in polyunsaturated fat intake corresponded to a 2–3 % significant reduction in risk for all-cause and cardiovascular mortality when energy intake from other fat remains constant. Again, monounsaturated fat intake was not significantly related to the risk of death.

Biological mechanisms regarding polyunsaturated dietary fat intake in relation to cardiovascular outcomes and adiposity have been proposed. A general beneficial effect of polyunsaturated dietary fat on cardiovascular function may be related to its activity in depressing plasma lipids, inhibition of apo synthesis and inhibition of cyclo-oxygenases and lipoxygenases activity, which, in turn, reduces eicosanoid synthesis decreasing thromboxane and platelets tendency to aggregate( Reference Kinsella, Lokesh and Stone 32 ). On the other hand, there is some evidence suggesting that polyunsaturated dietary fats are beneficial in terms of preventing obesity, overweight and type 2 diabetes risk( Reference Delarue, LeFoll and Corporeau 33 ). Finally, polyunsaturated fat intake may result as beneficial in terms of all-cause and cancer-related mortality also because of their antioxidative activity( Reference Hsieh and Kinsella 34 , Reference Porter 35 ).

The present work has limitations owing to its observational nature that limit the proposed results in terms of causal association. On one hand, it is acknowledged that randomised controlled trials and meta-analysis of interventional studies were conducted to evaluate such diet interventions and the effect of fat components on biomarkers of short-term outcomes( Reference Fattore, Bosetti and Brighenti 36 ). On the other hand, it is clear that these approaches cannot be technically performed when long-term outcomes, such as mortality, are considered in healthy subjects. Moreover, in the past, randomised control trials resulted in inconsistent outcomes as observational time, more than the sample size, is an operational limit( Reference Hooper, Martin and Abdelhamid 19 ). Nevertheless, another possible limitation was that the saturated and polyunsaturated type was not taken into account. This information represents an interesting public health question and will be certainly considered by further studies. Finally, underlying morbid conditions at baseline could have affected the results without any possibility of control. This second limitation and a related possible reversal causation can be excluded as prevalent morbid conditions at baseline were excluded in the main analysis and death in the first 18 months from follow-up was excluded in a sensitivity analysis.

The authors declare that there are no conflicts of interest.

Type of dietary fat intakes in relation to all-cause and cause-specific mortality in US adults: an iso-energetic substitution analysis from the American National Health and Nutrition Examination Survey linked to the US mortality registry
×

Type of dietary fat intakes in relation to all-cause and cause-specific mortality in US adults: an iso-energetic substitution analysis from the American National Health and Nutrition Examination Survey linked to the US mortality registry
×

Type of dietary fat intakes in relation to all-cause and cause-specific mortality in US adults: an iso-energetic substitution analysis from the American National Health and Nutrition Examination Survey linked to the US mortality registry
×
×