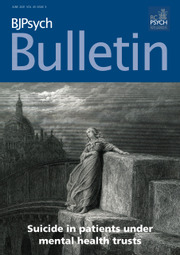 In this issue, an article by Odejimi et al (pp. 140–145) explores the root causes of deaths by suicide among patients under the care of a mental health trust, providing an insight that could influence the manner in which decisions, policies and resource allocation are carried out to further prevent and reduce the incidence of suicide among mental health patients.