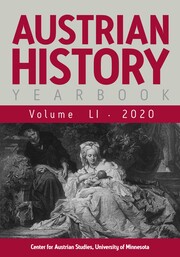 Forum: The Habsburg-Ottoman Borderlands: New Insights for the Study of the Nineteenth-Century European Legal and Social Order