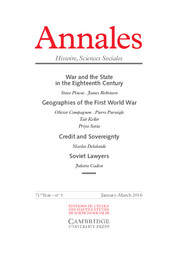 War and the State in the Eighteenth Century

Geographies of the First World War