Conflict, Balancing of Interests, and the Exercise of Jurisdiction to Prescribe: Reflections on the Insurance Antitrust Case 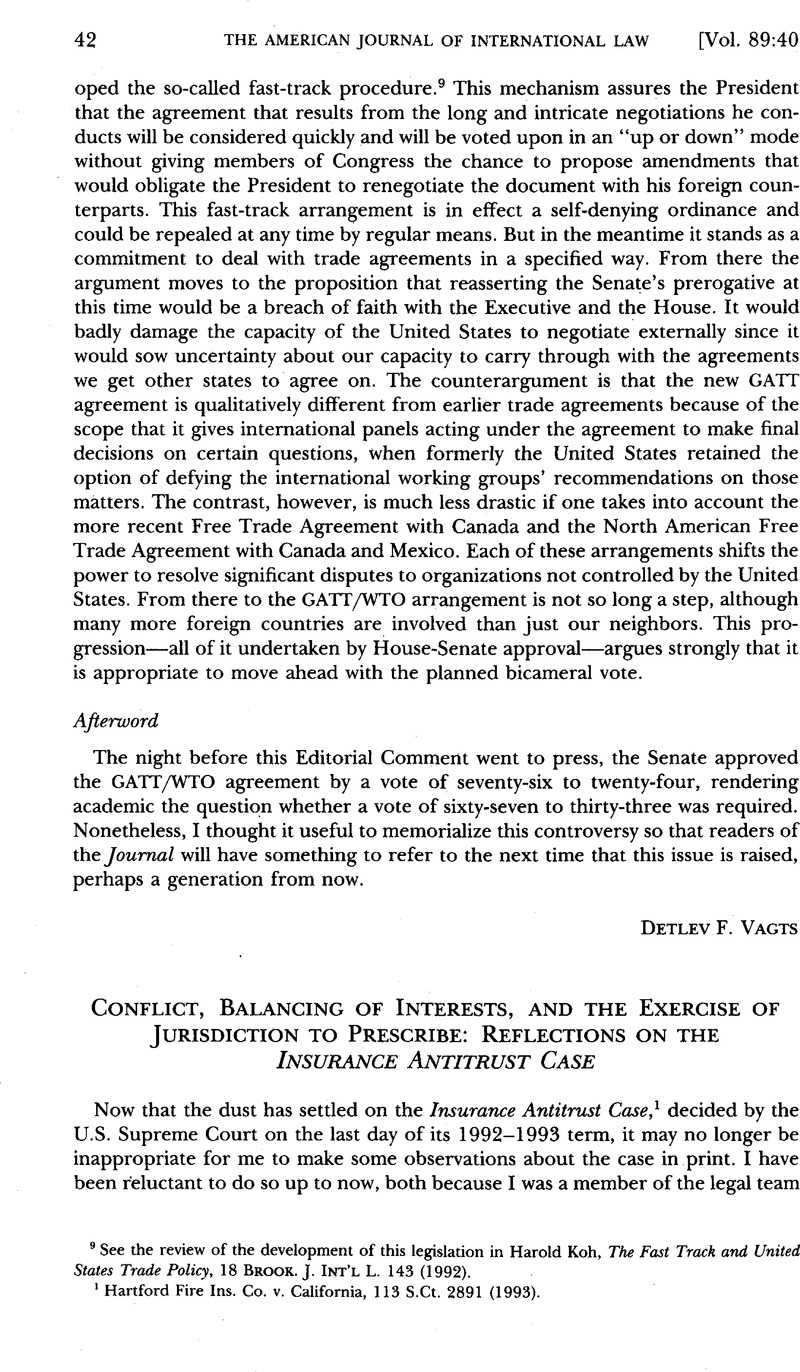 3 Lest there be any misunderstanding, I want to make clear that this brief Editorial is written to the extent possible from the point of view of a scholar, not of an advocate. I speak neither for the American Law Institute and my fellow reporters of the Restatement, nor for the London underwriters and their permanent counsel.

7 An insurance policy based on occurrence during the effective period of the policy has the effect that the issuer cannot close its books on policies written for a given period until long after the end of the term of the policy. In the 1980s, insurers and reinsurers that had written occurrence-based policies for the United States found themselves confronted with massive claims arising out of the use of asbestos in the construction of buildings, and also with claims arising out of underground chemical pollution. Defendants in the Insurance Antitrust Case contended that whatever they had done was intended only to stanch the losses arising as a result of such claims. Plaintiffs asserted that, nevertheless, the agreements were unlawful under U.S. antitrust law.

19 The U.S. Government, which had declined to become involved in the case earlier, submitted a brief amicus curiae on behalf of the plaintiffs, primarily devoted to the domestic aspects of the case. The brief of the Solicitor General also argued, however, that application of U.S. law should be stayed only in case of a direct conflict, defined as existing only if (1) the foreign government has directed the defendants to engage in the challenged conduct, or (2) the defendants would have frustrated clearly articulated policies of the foreign government if they had not engaged in the disputed conduct. Brief for the United States as Amicus Curiae at 28, Hartford Fire Ins. Co. v. California (Nos. 91-1111, 91-1128).

20 The domestic issues turned on the scope of the McCarran-Ferguson Act, 15 U.S.C. §§1011–1015 (1988), which essentially exempts insurance companies from the operation of the federal antitrust laws if they come under state insurance regulation meeting certain minimum criteria, but provides that the exemption is not applicable in respect of agreements to boycott, coerce or intimidate. Plaintiffs charged that the defendants had engaged in unlawful boycotts, thus losing their exemption. The district court had dismissed, and the court of appeals, reversing the lower court, had reinstated, the complaint on this ground against Hartford and the other domestic defendants. The court of appeals also held that the domestic defendants had lost their immunity by conspiring with foreign nonexempt parties. 938 F.2d at 928. The Supreme Court unanimously reversed this holding.

21 159 U.S. 113 (1895). As in Insurance Antitrust, the Court in Hilton split five to four, with a result that declined to give effect to the foreign interest. The statement by the Court about comity, however, has far outlived the holding of the case denying recognition to the judgment of a French court on the basis of lack of reciprocity:

“Comity,” in the legal sense, is neither a matter of absolute obligation, on the one hand, nor of mere courtesy and good will, upon the other. But it is the recognition which one nation allows within its territory to the legislative, executive or judicial acts of another nation, having due regard both to international duty and convenience, and to the rights of its own citizens or of other persons who are under the protection of its laws.

29 The Restatement (Third) §402(1 )(C), for instance, looks at jurisdiction based on effect in the territory of the state exercising jurisdiction as an aspect of territorial jurisdiction, subject, like other exercises of jurisdiction, to the requirement of reasonableness as set forth in §403.

39 I do not here address law related to litigation activity, such as banking secrecy, requirements of nondisclosure of economic information, and the like, which are subject to somewhat different evaluation.

41 See the discussion in the last paragraph of this Editorial.

42 Of course, the several citations to the Restatement could be marshaled in support of a contention that the Court agrees with that work’s basic approach, but I think the evidence supports only a prediction, not a conclusion in this direction.

(b) the connections, such as nationality, residence, or economic activity, between the regulating state and the person principally responsible for the activity to be regulated, or between that state and those whom the regulation is designed to protect;

(c) the character of the activity to be regulated, the importance of regulation to the regulating state, the extent to which other states regulate such activities, and the degree to which the desirability of such regulation is generally accepted.

49 Remember that since the proposed actions would not “arise out of” the defendants' activities in the United States, the lower threshold of “transacting business” would not be applicable.

50 The Restatement avoids the word “comity” except for cross-references, because the reporters believed that comity carries too much of the idea of discretion or even political judgment, as contrasted with the principle of reasonableness, which is conceived of in terms of legal obligation. If agreement can be reached or approached on content, it may not be worthwhile continuing to debate the terminology. See, however, the point made in text at note 55 infra.

Conflict, Balancing of Interests, and the Exercise of Jurisdiction to Prescribe: Reflections on the Insurance Antitrust Case
×

Conflict, Balancing of Interests, and the Exercise of Jurisdiction to Prescribe: Reflections on the Insurance Antitrust Case
×

Conflict, Balancing of Interests, and the Exercise of Jurisdiction to Prescribe: Reflections on the Insurance Antitrust Case
×
×